#Wirecard   #Bavaria   #Germany
The weather is mostly gray like that of insolvency administrator Jaffe's suit, when the court proceedings against Dr. Markus Braun and two top managers of Germany's insolvent payment provider Wirecard began in the brand-new courtroom of Stadelheim Prison on December 8, 2022.

Court room number one, which still has a scent of fresh paint, is full of people. On the right hand side Munich's state attorneys, in front of them the insolvency administrator. On the other side, facing Jaffe across the aisle, sits the former top manager of what was once Germany's largest DAX company. The black turtleneck sweater Dr. Braun is wearing in court in honor of Apple founder Steve Jobs is a clear message to Jaffe: look, I am still a visionary who knows more about what is coming than all of you, he seems to non-verbally intend to express.

Somewhat after the initial judiciary admission, things ignite. Not in the all in all five-hours (!) document readings by Munch's public prosecutors, which burns three at the end rather hoarse of them after their partial lectures, but instead by the siren sounds of the many smartphones. 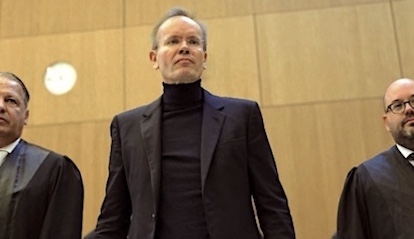 Dr. Markus Braun in black turtleneck, December 8, 2022
Germany's Department for Disaster and Population Protection had sent out a nationwide test warning at 11 o'clock straight. The court judge interrupts the hearing 10 minutes before in full knowledge of what is about to happen.

In the past, things were not altogether dissimilar for the payment provider from Aschheim - now insolvent after 16 years of company history - and its connections to Munich's Public Prosecutor's Office. As early as 2002, a first criminal complaint was filed with Munich's state attorneys. The then just ousted company owner sounded the sirens loudly that company insiders would be responsible for the theft of intellectual property. However, the prosecutors from Munich refused to take a closer look at Wirecard's Markus Braun and then young Jan Marsalek.

The situation was similar around 2008, when Germany's Investor Protection Agency (SdK) complained about Wirecard's accounting fraud at the shareholders' meeting, only to file a criminal complaint against Wirecard later. But instead of targeting Wirecard's obvious fraud, Munich's Public Prosecutor's Office indicted him and made sure to convict the SdK member for his truthful investigations into the Wirecard fraud. Ironically and under the sounds of sirens, the SdK member was seriously locked up for months in the exact same correctional facility where the proceedings against Dr. Markus Braun and Co. are now taking place.

The involvement of Wirecard UK in the money laundering business of Michael Schuett, who was convicted in Florida, USA, was also not really examined by Munich's public prosecutors. The Wirecard Investigational Committee at the Bundestag in Berlin even found out that a former Bavarian State Police President was hired by Wirecard as a consultant, who worked lobbying at and mingling with various police stations, including a number of foreign consulates and embassies, to the decisive benefit of Marsalek and colleagues. Which may very well was one of the reasons why Munich's public prosecutors instead 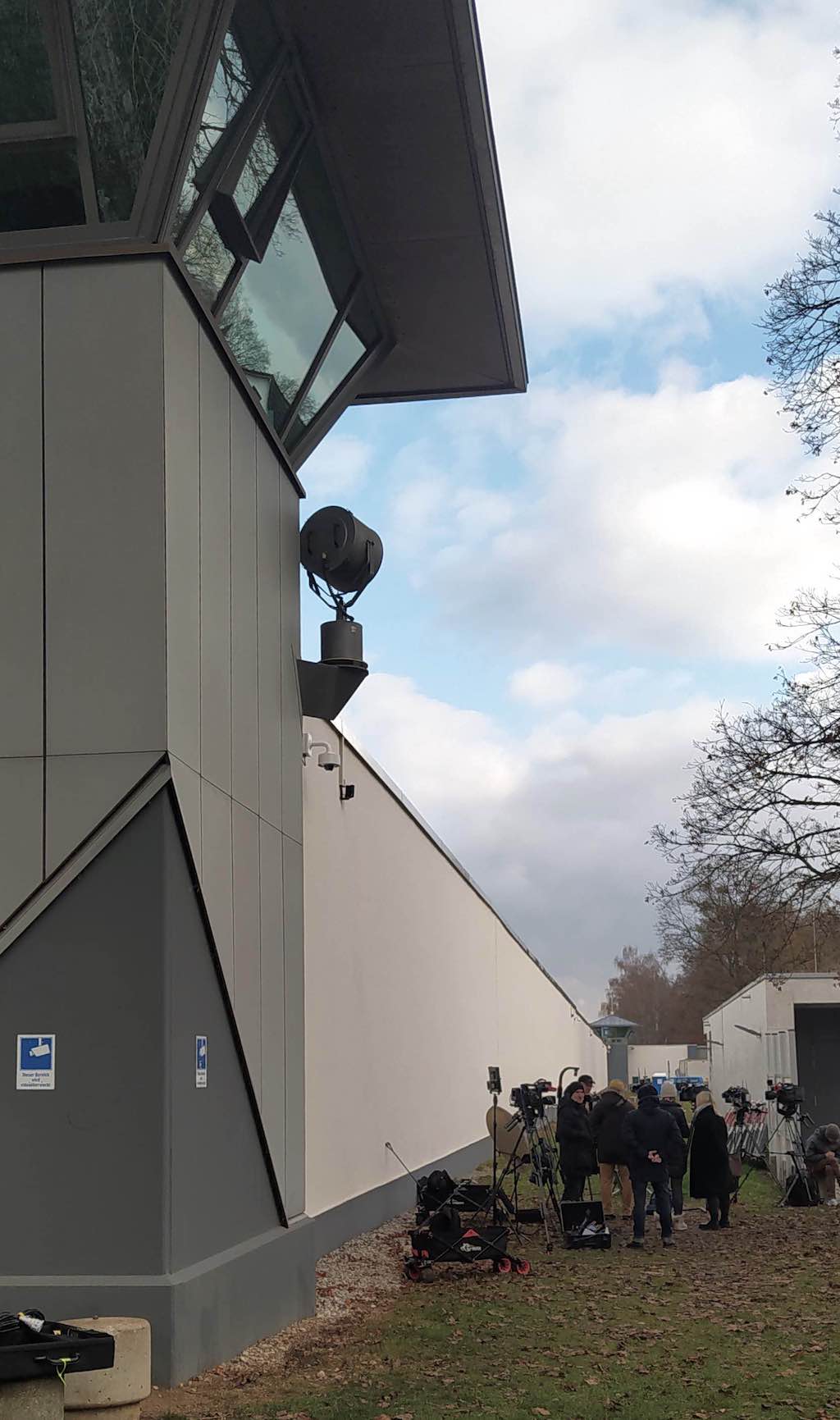 Mass media at court entrance
investigated stock traders from England, and even initiated an investigation into Financial Times journalists as late as 2019 for their truthful reportings about Wirecard's fraud.

All this seems to have been blown away from the many desks of Stadelheim's courtroom on December 8, 2022. The prosecutors from Munich read, and read, and read their indictment. All in all for about five hours. The charges relate almost exclusively to balance sheet and financial fraud issues, listed meticulously for each fiscal business year.

The coming court hearing dates have already been scheduled and will last until the end of 2023 at a minimum, according to the paper list outside of the courtroom, where literally all of Germany's mainstream media outlets position themselves to mostly blame Wirecard's former CEO over siren sounding microphones. Which may help to prevent Berlin from even considering installing a second Wirecard investigation committee. It is nothing but a gigantic and huge scandal, and also a great blamage for the entire local Public Prosecutor's Office, given years of hopefully not deliberate obstruction of justice. Including high-ranking Bavarian executive support for Wirecard by the way, which went all the way to picture perfect nearby Lake Tegernsee.

Already on the second trial day, Braun's defense attorney filed a motion to suspend the proceedings. He complains convincingly that neither Munich's Public Prosecutor's Office, nor Munich"s Higher Regional Court responsible for the custody control of Dr. Markus Braun, nor the investigative committee in Berlin had really looked into the individual bank accounts of the third-party partners in detail. If this had been done, it would have been discovered that incoming payments in the billions were booked to these operational accounts. Dr. Braun's supervisory duties could not have been violated since the fundamental facts were not investigated at all. Wirecard's Oliver Bellenhaus is allegedly responsible for the fraud. Bellenhaus as chief accountant, who for years was referred to by Munich's public prosecutors as a so-called "crown witness", had demonstrably diverted the missing billions via a shadow structure that was set up on the Antigua Islands among others - this with the help of Marsalek and von Erffa, so Braun's defence lawyer.

In addition, Munich's Higher Regional Court responsible for Dr. Braun's custody control had deliberately adopted false narratives from Munich's public prosecutor's office, mostly from mid-2020. Legal assistance was delayed, important requests for information and evidence were sabotaged by the prosecution and sometimes deliberately withheld, Braun's defense counsel explained in his opening statement - including literally all account movements of the individual third-party partners, as well as over 180,000 Asian sales emails. For these reasons a request for suspension of the entire court proceeding is necessary.

After his speech, the alarm sirens must have been sounding among Munich's prosecutors. One day later, it is announced that the judge in charge had become ill and that the trial is postponed until the following week, continuing on December 19, 2022. On that date, Bellenhaus' defense attorney first elaborates on Dr. Braun's personality structure, as well as Jan Marsalek and the third defendant Wirecard manager. Braun's defense strategy is based on "conspiracy theory", Bellenhaus is convinced; he is sorry for the damage done, nevertheless. Marsalek, Ley and von Erffa had given him orders concerning the chief accounting practises. Together with von Erffa, Bellenhaus falsified protocols and receipts in order to fake the entire TPA business, which according to him and Munich's public prosecutors allegedly did not exist at all.

To this date, no serious official indictment against Jan Marsalek is issued, who remains absent.


Is Dr. Markus Braun's turtleneck a sign of defiance, or rather a harbinger of things to come ?

This article was entirely created and written by Martin D., an accredited, independent, investigative journalist from Europe. He holds an MBA from a US University and a Bachelor Degree in Information Systems and had worked early in his career as a consultant in the US and EU. He does not work for and does not own shares in any corporation or organisation that would benefit from this article.
Leave a comment:

About Wirecard's financial auditors and the chess game