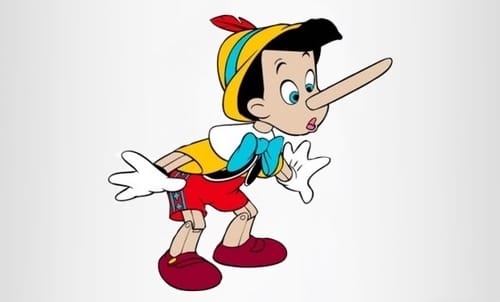 Dark Mode
#Germany   #Merkel   #Trump
Everyone surely knows the fairy tale of Pinocchio, the wooden boy, whose nose grows longer the moment he starts to lie. It seems that such a Pinocchio had visited the White House in Washington, DC on March 17, 2017, invisibly standing on the shoulders of Angela Merkel, Germany's Chancellor.

It is on this exact day that Merkel met Donald Trump for the first time after his election win in November 2016. At a joint press conference, the US president answered questions of a (very German !) journalist about alleged espionage activities of British intelligence agencies, and whether he - the US president - would regret his "accusations", and also some of his Twitter comments. Trump responded:


Very seldom, probably wouldn't be here right now [without the Tweets], we have a tremendous group of people that listen and I can get around the media when the media doesn't tell the truth, so I like that. As far as wiretapping, I guess by this past administration, at least we have something in common [points at the Chancellor], perhaps ...


The chancellor's reactions to these presidential remarks unveiled the Pinocchio. A close-up demonstrates how much she needed to force herself to bury - or rather scream - all her knowledge about this matter into herself.

It is surprising that her nose had not increased dramatically in length, just like Pinocchio's would, when he lied.

Because she knows and remembers very well that in June 2013 parts of the Obama government and during what is known today as the NSA affair monitored leading politicians world wide; the respective data was stored. Institutions and buildings of the United Nations were spied upon and e-mail accounts were hacked - resulting in diplomatic tensions with the US-Obama-Administration all over the world.

She is also very well aware that for the first time in the history of the Federal Republic of Germany the US American Ambassador to it had been called into her own chancellery to explain the espionage matter shortly after June 2013.

Even more strange seem her secretive remarks considering the fact that a commission of the German Bundestag is busy investigating the NSA affair in depth since March 20, 2014 - and even until today.

Merkel also forgot to remember and/or mention that it had been her own chancellery that complained in a letter from October 2014 to this exact same commission about alleged 'illegal disclosures' of classified information to the public (letter on netzpolitik.org here). The chancellery threatened the commission to potentially sue some of it's German Bundestag members, a notion that the NSA Commission rejected and even hinted towards intimidation related to their work.

Maybe this is all just the result of the chancellor's lack of experience in politics, and to which the US president referred to during Merkel's US visit in April of 2018:

The US president also tried to convince the chancellor here that it might be better to just tell the truth (above video starting around minute 37:50), because one "could be fired almost as quickly as in Germany" (around minute 25:40).


We are very proud of the job we have done for the veterans ... We got accountability approved. When somebody treats our veterans badly, we can fire them so fast, ALMOST AS FAST AS IN GERMANY [points to Merkel]. WE GET RID OF THEM. And I can tell you, we're getting choice, we're putting choice in very very strongly, we have tremendous support in the Senate for that. But I do have a lot of people who want the job. WE ARE DOING A GREAT JOB OVER THERE.


Things are getting interesting between Chancellor Merkel and US President Trump also in 2019. Trump directed a number of intense Twitter messages towards a group of four freshmen Congress members (US-Democrats) in July, after these four women had launched a number of attacks against not only the Trump Adminstration but also against the US government, not hesitating to even proclaim anti-semitic remarks. On July 19, 2019, shortly before her summer vacation departure, Angela Merkel gave the following statement regarding the matter in front of the German press:

A close up of Merkel's response, especially in the moments after her verbal remarks, unveils the German Scream 2.0: