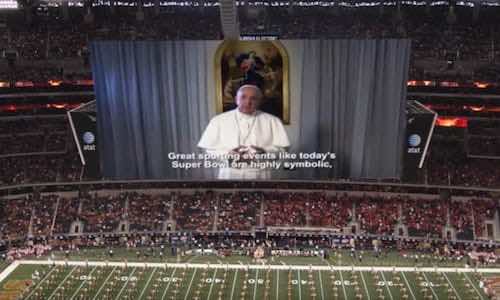 Dark Mode
#Catholic   #NFL
Alejandro Villanueva, so far a pretty unknown sportsman from the Pittsburg Steelers professional american football team suddenly turned into a celebrity on September 24, 2017 when he decided against his coach and the entire team to not participate in their protest in the cabin. Instead, he went outside to a corner of the stadium where he would stand erect, and dared to sing the US national anthem while covering his heart with a hand.

Before joining pro-league football, Alejandro Villanueva had been a ranger and soldier with the US Army and received multiple honors and medals, also for his service in Afghanistan and where he saved the lives of other US soldiers under enemy fire.

His photo standing and singing the US anthem circulated the globe within minutes. And not long after, his jersey became a top ranked sales item at the National Football League's webshop.

To protest against the US-anthem boycott demonstrated by some NFL players, some ex-fans have already started burning jerseys and even their season tickets:

By the way, a single ticket for a regular NFL games costs around 93 US Dollars on average, each player in the NFL earns on average 2.44 million US Dollar per year, income from advertisement not included; extra cash which in some cases can even exceed the salary's hundretfold.

In any way, the NFL, Inc. should never be regarded as a naive sports franchise company that's busy organising their jersey sales only. In 2016, total sales revenues of the NFL, Inc. exceeded 13 billion US Dollar.

And the huge influence of it's top manager Roger Goodell seems to not even come to an end before the Pope in Rome. During February 2017's famous Super Bowl event which was followed by over 1 billion people on TV screens world wide, Goodell and his NFL people had invited Pope Francis to broadcast a world peace message on the large screens in the stadium of Houston, Texas (and this is absolutely no fake news):

Interestingly, no one had invited the Pope so far to speak a different message after the devastation of hurricane Harvey hit Houston half a year later. The Pope along with his aiding Cardinals in Rome seemed not really interested in handing out meals or other help to hurricane victims. And neither in holding a religious mass at the exact same location where Pope Francis had put his peaceful words on display to everyone participating in the sports event only six months before.

Suprising, considering the fact that the mostly leftliberal Catholics around Pope Francis are trying hard to turn the Catholic church into an organisation dedicated to mainly social justice issues.

Just in case the Pope and his advising Cardinals would ever be interested in giving a speech in Houston again, we have prepared the teleprompter text already:


Tragic devastions like we have seen caused by hurricane Harvey are highly symbolic, showing that it is possible to build a culture of encounter and a world of peace. By particpiating in the rebuilding efforts we are able to go beyond our own self-interest, and in a healthy way, we learn to sacrifice, to grow in fidelity and respect the rules. May the hurricane devastation of 2017 in Houston and elsewhere turn into a sign of peace, friendship and solidarity to the world. Thank you.