Dark Mode
Listen to this article
A Spanish Server

#Scytl   #SmartMatic   #Elections   #Fraud
Many are familiar with Torrero events in Spain, in which a usually courageous man enters an arena to directly engage with a bull. Only equipped with a red tissue, the Torrero mostly manages to leave the bull entirely exhausted, enabling him to place lethal weapons into the bulls neck after many hours. One is almost reminded of such a spectacle when a US Congressman hinted in the middle of November 2020 that someone in Germany had spread the message the US Army had confiscated a computer server in the German banking capital Frankfurt on November 9, 2020, or had at least digitally obtained all of its contents. The server originally belonged to a company named Scytl, headquartered in Barcelona, Spain. Now in the hands of a bank, the Frankfurt server was allegedly connected to various US 2020 election result databases, run and operated by Scytl, which filed bankruptcy in the Summer of 2020 and was about to enter the final liquidation process. 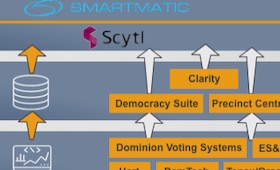 Most US state counties use ballot machines and connect them to a few major software systems to gather the votes. These software in turn forwards their information to various databases, hosted on Amazon's IT infrastructure, some of which are owned by the private company Scytl headquertered in Barcelona, Spain and/or SGO Smartmatic in the UK. 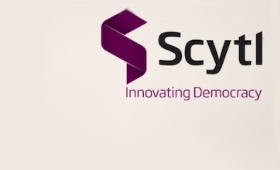 Scytl was founded in 2001 by two election system researchers from the University of Barcelona, bought US software maker SOE in 2010. In 2013, Microsoft co-founder Paul Allen invested $30 million through Venture Capital Fund. The company and their software engaged in several elections around the world, e.g. USA, Mexico, India, Switzerland and the EU. 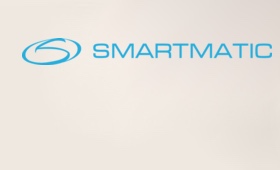 Another company dedicated to gloab voting counting is Smartmatic from the UK. Chairman Sir Mark Malloch-Brown was VP of Quantum Fund. The company came under scrutiny when it purchased US software maker Sequoia Voting Systems in 2005, alleged to have ties to the Venezuelan government. Smartmatic's ownership is shady, many hidden trusts and funds control the UK based company. 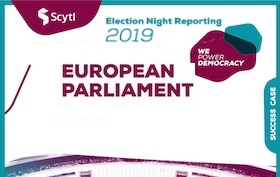 In 2019, an international group of election fraud experts in Switzerland found that Scytl's software could easily be manipulated so that a single person could defraud an entire election. A report on US election irregularities stated that US 2020 election data was also forwarded to Scytl and Smartmatic servers. Scytl provided the IT infrastruture for the 2019 EU elections and stated in one of their case studies they had 'a back-up center in Frankfurt'.

Most US state counties use voting machines to count the millions of ballots and utilize a few important software systems to gather the electronic results submitted by these machines. The most widely used software utilized by the vast majority of US counties are either Dominion Voting Systems, Tenex, ES&S, Hart or DemTech. Once having received county ballots, the various software systems forward the voting counts and information to a handful of databases, run on Amazon's cloud IT infrastructure AWS and named Clarity, Democracy Suite, Precinct Central. While Clarity database is entirely owned by Scytl, the others are either operated or at least accessible by the Spanish company. 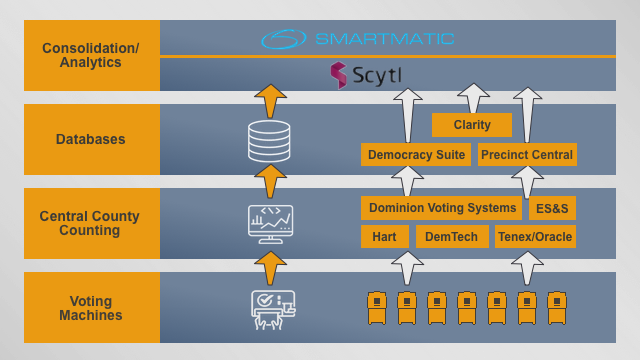 The company, located in the city center of the Catalan capital Barcelona, has an interesting history worth telling. It was founded in 2001 by electronic voting systems researchers Andreu Riera and Carles Rovira from the University of Barcelona right after the dot-com bubble had burst. The two carefully chose the company name as an encryption of the first known encryption method named Skytale, used for military purposes in ancient Greece some 2500 years ago. Pere Valles joined the company early on, as did a local Financial Group. In 2006, founder Riera died in a car accident. A few years later, Nauta Capital became a shareholder, and in 2010 Scytl paid 10 million USD for the US-based company SOE Software, a major provider of electoral management solutions. Sales reached 25 million USD, the company had offices in Washington, DC, Toronto, New Delhi, Athens, Kiev and Singapore and a workforce of over 400 people. In 2013, Microsoft co-founder Paul Allen invested 40 million USD through his famous Vulcan Capital Fund.

Strangely however, despite plans to enlist the company at NASDAQ, Scytl's fame eroded in the years to come. The reasons are dubious at least: projects failed and strange re-organisational efforts were sabotaging Scytl's projected success. In December 2019, the company entered pre-bankruptcy proceedings, a Spanish court declared the formal and legal end of the Barcelona company on June 2, 2020. Earlier, Scytl's shareholders JB Capital, Vulcan Capital, Nauta Capital and Spinnaker could convince US fund Sandton Capital to take over bankruptcy proceedings and apparently, Sandton Capital did not hesitate much to reconnect one of Scytl's server in Frankfurt back to the Internet. Or came the order from new owner Paragon Group, which bought Scytl's business remains in a deal on October 20, 2020, coincidentally exactly 14 days prior to the US presidential election ?

Another company that is dedicating itself to global voting counts is SGO Smartmatic, in 2014 re-formed as a UK company under Chairman Mark Malloch-Brown. Connected to George Soros by having been the VP of the billionaire's Quantum Fund - now named Open Society Global - Sir Malloch-Brown is deeply tied to the UN, the Clintons and additional Soros organisations. Smartmatic came under scrutiny in 2005 when it purchased a US company named Sequoia Voting Systems. US Congressmen requested the Committee on Foreign Investment in the United States (CFIUS) to take a closer look at the deal already back then, since Sequoia was alleged to have had ties to the Venezuelan government. US officials declared in 2006 that "there seems to have been an obvious effort to obscure the ownership of the company", referring to Smartmatic's hidden web of trusts and funds that engage in the UK company.

In 2017, the Venezuelan general election was rigged by around 1 million votes, managed by Smartmatic software, which was in contact with the Venezuelan government since 2004. A total of 8 million people voted in that election, which Smartmatic CEO Antonio Mugica referred to in front of a buffled press corp in London, stating that “we know, without any doubt, that the turnout of the recent election for a National Constituent Assembly [of Venezuela] was manipulated”. A whistleblower stated in 2020 that Smartmatic uses the same software as Dominion Voting Systems, the latter being used in nearly 30 US States, and that the software was instrumental in keeping Venezuela's longtime president Hugo Chavez in power in the past:

An international group of election fraud researchers in Switzerland found in 2019 that Barcelona's Scytl software could easily be manipulated. The software auditors found that a backdoor glitch in the system allowed legitimate ballots to be entirely replaced with fraudulent ones:


The vulnerability is astonishing. In normal elections, there is no single person who could undetectably defraud the entire election. But in this system they built, there is a party who could do that. (Matthew Green, Cryptography Teacher at Johns Hopkins University)

Scytl was quick to downplay the security vulnerability, stating that hackers needed access to the IT infrastructure of the Swiss Post, which purchased the rights of Scytl's software source code in April 2019. The claim was made that "help from several insiders with specialist knowledge of Swiss Post or the cantons" was needed, while at the same time ignoring the fact that the group of security experts had no such access when detecting the software problem rather quickly.

A similar incident happened in the aftermath of the US torrero 2020 election event, when Scytl was quick to debunk any allegation about massive fraud, also on their Frankfurt server. A confidential report about election irregularities, conducted in the months ahead of the US 2020 presidential elections however states that election data was forwarded to multiple servers outside of the US, explicitly also to a server owned by the Barcelona company:


Voting records for the 2018 General Election was automatically forwarded from the clarityelections.com website to multiple domestic and foreign DNS addresses, inlcuding ES&S, Scytl in Barcelona, Smartmatic in London, and a Russian server at South Ural State University in Chalyabinsk, a known GRU installation.

Additionally, Scytl itself hinted in 2019 that it is tied to the German city Frankfurt, despite their claim from 2020 "we do not have servers or offices in Frankfurt". The company was selected to provide the IT infrastructure for the 2019 EU elections as well. In a 2019 Scytl case study, the IT provider stated the following:


To guarantee the success of this project [EU 2019 Elections], Scytl's team began preparing nine months in advance. Over this time, we conducted 3 separate trial runs, 5 user acceptance tests, and we set up the data collection center in Barcelona, as well as an emergency back-up center in Frankfurt. 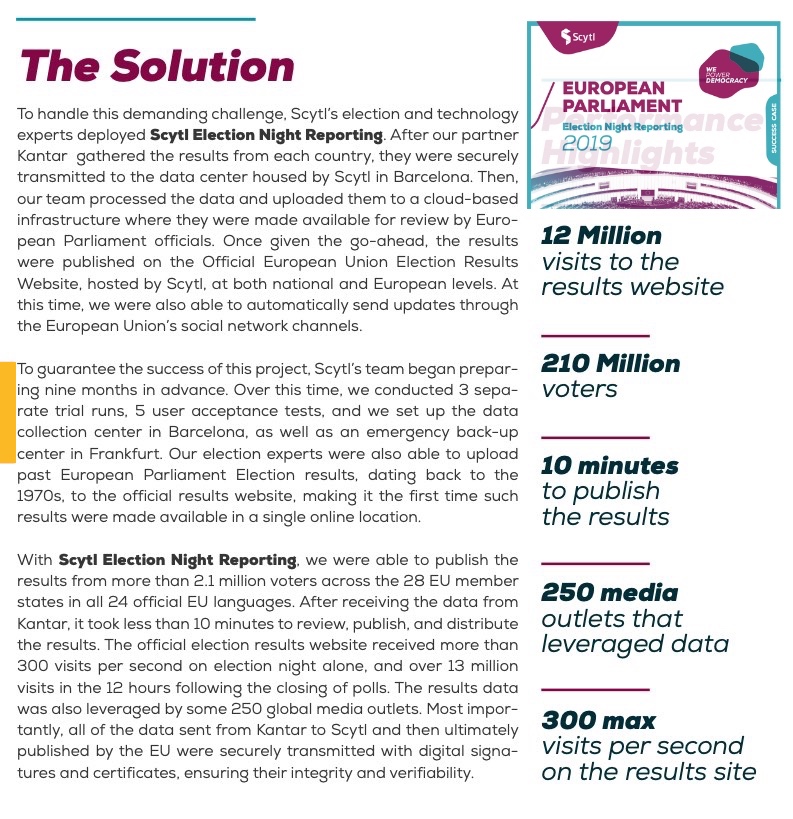 Not unsimilar to Spanish torrero events, where usually, at the very end, the bull is dragged through the streets for public display and hence everyone to see.

One Damn American Thing After Another

About William Barr and Dominion Energy