We could eventually utilise cookies and may need access to some of your browser settings. Click the following button if you agree with our data protection terms according to EU regulation 2016/679 (GDPR). We never ask nor store any of your personal data when using our website in a regular way. 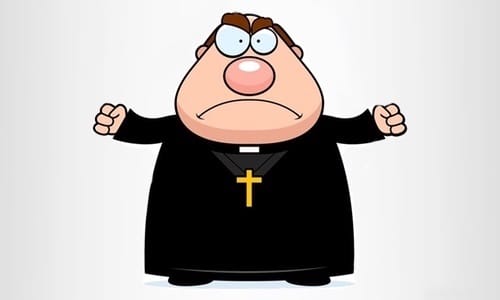 Dark Mode
#Catholic   #AI   #Munich
Atragic accident, a tragic event, a tragic football game. Who does not know such sentences which are heard when something important happens, something unexpected. We often use the word 'tragic' quite naturally these days without much thoughts, even if misused.

The word comes from the ancient Greek language and grew in the context of a certain form of a story or theatre play. A story can only be called tragic in a true sense if one of its protagonists causes a catastrophe only because he or she acts with the best of his or her intentions. In the famous 'King Oedipus' tragedy for example, the protagonist tries to prevent a catastrophic prophecy turning into reality which had told him that he would soon kill his father and marry his mother. With the best of his intentions he decides to leave his home to protect his parents and tragically initiates the catastrophy precisely because of this well-intended move.

What does all this have to do with Cardinal Marx ? Well, quite a lot. Reinhard Marx, son of a locksmith father from the western part of Germany with strong roots in social justice issues soon found himself devoted to the social doctrine of the Catholic Church, somehow walking the footsteps of his father.

His books are mostly dedicated to this subject, and his thoughts were formed and strengthened when,
“Those who work must be able to participate in social progress. Only then will we be able to take away uncertainties and fears from the people.“

(Cardinal Marx)
after the end of the Cold War and the fall of the Wall, there was a genuine renaissance towards social agendas - a balancing swing in response to the intense spreadings of neoliberal capitalist principles into virtually every corner of the world after the fall of the Eastern Communist Bloc. With his focus on social teaching, Marx first became bishop in Trier and later in Munich, where he was not only ordained as Cardinal but as such also named Chairman of the German Bishop Conference, President of European Bishops (COMECE), and head of papal commissions in Rome.

According to domradio.de from April 8, 2017, Marx stated in an interview with the German Spiegel magazine the following: “People should be able to shape their lives decently on their own responsibility through their work. The job opportunities offered by the low-wage sector are not enough,“ he said. Long-term good jobs would be created through investment rather than through Hartz IV (low income) laws. “The low-wage sector should be an introduction to a standard employment contract with decent pay.“ The normal working relationship is the “backbone of our society and thus also of our freedom,“ emphasized Marx. “Those who work must end up with more than just the bare essentials to survive. They must also be able to participate in social progress. Only then will we be able to combat uncertainties and fears.“

Perhaps these few phrases focus on the core of Marx's views. For decades already, by the way. Again and again his focus on his 1990's social church teachings which do not want to be extended, it seems.

Apparently unobserved by the Cardinal and truly tragically, our societies have radically evolved however. Beyond Marx' focus on a socially acceptable and equal distribution of goods, a completely different component had surfaced in the meantime and had become the decisive factor
“The regular employment is the backbone of our society and thus of our freedom.“

(Cardinal Marx)
of our social and economic life over the past 30 years: technology.

Within only three decades, software algorithms that once fed funny computer games on home computers - developed by mostly American entrepreneurs in their garages - evolved into complex architectures for automatic robots in separate production plants that are communicating with each other and with the diminishing human workforce. Global computer networks have evolved that cover every corner of the earth, and small smartphones were developed with capabilities that only bulky supercomputers were able to perform only a few years ago. In the Silicon Valley, the stronghold of technology companies near San Francisco, people do not really talk much about money anymore when a promising idea is about to be turned into reality. It is all about ideas and about shaping the future of our societies. Radically. Californian. Globally. And with force.

Ever-growing productivity gains in almost any industry sector were and are the result, as well as the emergence of entirely new industries - along with the disappearance of others. The implications could hardly be constrained already in the past decades: massive, large-scale labor rationalization was one of the results of this mega-revolution named Digitalization.

But what has now sprung from the forges of the many digital architects is the beginning of a new wave of technological developments that will make the recent past look like a kindergarden.

The first uproar was a computer that became the undisputable world chess champion. Then, a supercomputer in a 'Who Wants to be a Millionaire' show was able to beat the brightest human competition. And in 2016, a new self-learning software algorithm beat the world's best Go player 4:1 - in an Asian board game that has more game variants than atoms in the universe. The software had revealed an inexplicable intuition and made moves that even their inventors were unable to understand.

'Artificial Intelligence', in short A.I., or machine-learning algorithms are on everyone's lips. They are utilized in self-cleaning cleaning robots, in speech recognition software, in medicine, in advertising, at Google, Siemens, in self-driving cars, in aircrafts and remote-controlled drones, in high-tech goggles, refrigerators and heaters. Everywhere and seemingly invisible. But most importantly: they learn. By themselves and with the help of its inventors. They get better, every day, they get faster and smarter, through millions and millions of data that these algorithms analyze every nanosecond. Every accident - even a deadly one - of a self-driving car makes the software only better. Algorithms are 'trained' and their neural networks shared. And no one has found a 'Power Off' switch for the Internet yet.

These self-learning algorithms find a perfect symbiosis with the physical real world through their use in robots, for example. Cameras act like eyes, capturing everything and everyone. The software makes decisions for any approaching situation by the use of brain-imitating computer algorithms and so-called test data - a small subset of known information-decision patterns. 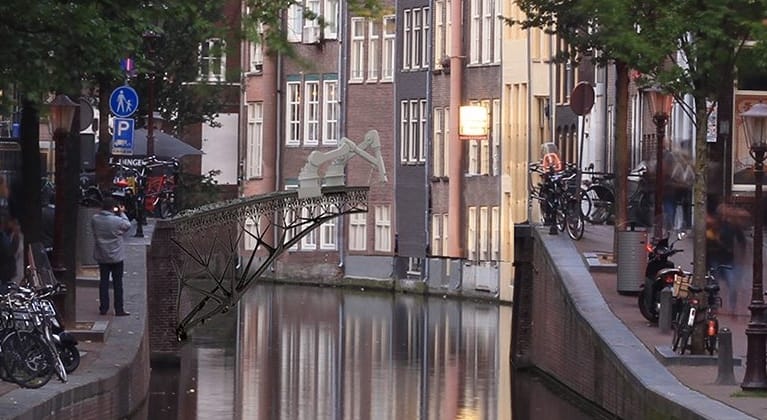 © MX3D
The results are robotic arms that move with astonishing intelligence and speed. Its linguistic capabilities are turning more and more human-like. In Amsterdam, the first 3D printing robot has already been utilized, fed only with material. The robot then 'prints' the small bridge over the river more or less on its own.

How far-reaching these developments are can be read in a report of the EU Commission from mid-2016 and which stated that A.I. robots should be classified as an 'electronic person'. EU parliamentarians concluded that robots are a challenge and a potential threat to social security systems, as they will increasingly be able to handle work that previously required highly skilled human - and academically educated - workers. Even Bill Gates - not really known for supporting Catholic agendas - came to similar conclusions when he stated in an interview from early February 2017 to consider taxations of A.I. robots that would replace human jobs on a large scale in the future.

In a McKinsey study, two thousand distinct work activities were evaluated according to future potential for replacement by robots and intelligent software. Depending on the
“A study by PwC estimates that 38% of jobs in the US could be lost by robots and smart software by 2030; in Germany 35%, Japan 21%, UK 30%.“
(Quartz Magazin)
work activity, a probability of a minimum of 30% to a maximum of 90% is predicted in this study for a broad range of diverse jobs.

How exactly these technical developments will manifest themselves in the future is not certain yet, some speak of a so-called "augmented reality" that these intelligent machines could provide through the software's access to enormous knowledge. What is certain however, is that a giant wave with completely new challenges is about to roll upon us, should voltage and electricity not dry up suddenly.

The Cardinal's comments hence are the rather naive result of an ignorant misinterpretation of our social developments for decades already, preventing the Church from recognizing and anticipating these developments. Meanwhile, the Silicon Valley laughs at such social romanticism and calls upon all governments to introduce at least the basic universal income to prevent social uproar. The principles and mechanisms by which Cardinal Marx has extended the Church's social doctrine could soon be in danger and may be called into question entirely - they could eventually lose the entire foundations they were built on.

Leaders not only from within the church should face these gigantic technical and thus social waves today. Their current response will make it even more challenging to preserve humanity, to protect the human race from highly intelligent machines.

The more a former - and in the near future more so disappearing - human self-identification by what was once referred to as 'work'
“When asked whether it was up to the state to correct injustices Marx said: 'Certainly so, the state should utilize the appropriate instruments like taxes for example.' He who has more money should give more. That is the core of solidarity.“

(Cardinal Marx in a conversation with the Spiegel magazine)
The assets of the Archdiocese Munich are worth about 6 billion Euros.
is about to be challenged by AI, the more humans need to find true alternatives to prevent the deconstruction of mankind. The churches should desparately face this challenge. If they fail to address the issue, others will have to take their place.

All this does not seem to concern Cardinal Marx much. The Cardinal's Social Doctrine stands on solid German ground, he may claim. Maybe it is time for him to think things over. Maybe take a break, maybe go to a monastery. Get back in contact with the senses again. And maybe trying to break out of this circular movement so that he can be what he should be: a shepherd for his sheep and not a jet-lagging manager who is about to turn into a tragic bishop.


We decided to deliver our article into the Cardinal`s mailbox in his palais in Munich. From there, our article was apparently forwarded to the German Bishops' Conference. A few weeks later, we had received a response from there, and which proves that the Cardinal truly needs a better advice not only regarding this matter.

Read this statement from the German Bishop Conference here.

by Martin D., an accredited and independent, investigative journalist from Europe. He holds an MBA from a US University and a Bachelor Degree in Information Systems, worked as a Consultant in the US and in the EU, and is currently writing on a book on how the mainstream media turned into a radical political player.
Leave a comment: