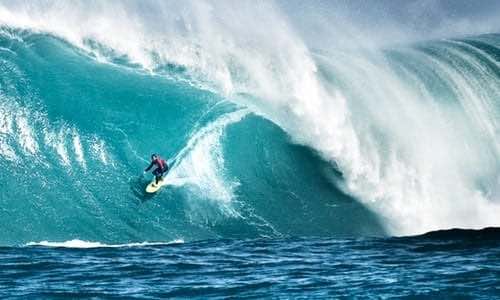 Dark Mode
#Munich
The waves are huge. A hurricane far out in the Pacific Ocean has driven the massive waves to the shores of San Diego. The beach is closed for swimming, and even the radio reports about the waves of the decade. Everyone who has anything to do with surfing is on his or her feet to visit the shore. I take my surfboard, find a spot where one is still able to paddle out, and soon sit in the water on my board - there, in front of the invisible line in the water where the waves break behind me. They make a clear water pipe before crashing down in a thunderous noise, uniting in a wild and turbulent white water foam with the ocean again.

I sit on my surfboard and start to analyse the waves. They lift me almost 9 meters up and back down again. I observe how long it takes for the next water mountain to roll in slowly but inevitably. Finally, I pick a wave, turn my surfboard towards the beach and paddle with arms and legs, since the trough tries to pull me back. Then finally, the water mountain with all its energy arrives. A concentrated force which is first noticed by a rapid elevation of me and surfboard.

Slightly before reaching the highest point of the wave that had rolled in from the back, I push myself up with arms and legs and try to balance my body out on the board. The wax prevents my feet from slipping. But as soon as I stand on the board I notice how my body weight is distributed unevenly to one side. The surfboard digs with its left edge into the water and can not be evened out by my quick weight distribution. I loose balance and fall from the surfboard into the water.

First, for tiny short moment, it is quiet underwater. The nearby crest has not reached its full maximum yet. Unnoticed from the outside, however, one finds himself in the midst of the water in a kind of energy pendulum. One that has been generated by the wind thousands of kilometers away, had hiked all the way to the coast and is now unable to oscillate in the usual way from the water surface to the seabed miles below and back again. The shores are just too shallow after the vast depths of the Pacific Ocean. The condensed energy pendulum here however wants to express itself in the same way as it did far out in the Pacific. It is now forced to break through the water surface because of its inherent and enormous energy that still wants to oscillate in a similar way. It drags water from behind in its relentless aim of despising gravity. Subsequent energy waves are dammed up and create the water mountain known to the people on the shore as a wave. But ultimately, it is a from the outside visible manifestation of a pent-up energy pendulum within the water atoms that had oscillated for thousands of kilometers from the water surface to the seabed, and is forced to reach out to the sky now.

Soon, my body is not dragged slightly backwards any more, but is boosted like a turbo-elevator upwards because the concentrated energy does not make any difference between me and the many water molecules around me. The energy wants to continue to break out to the top with me and the water and without anyone or anything being able to stop it, it seems. But at some point the water mass is just too heavy. It is gravity that brings an abrupt halt to the sky storming water-wall.

The moment before the breaking of a clear and clean ocean wave is like a symphony of nature. For a brief moment, four invisible motions within the water have created a perfect balance. That moment was always very special to me - a tiny moment of calmness and balance. Like a sort of portal through which one is allowed to enter a different reality, briefly before the wave ride begins.

Underwater, I seem to have reached the top of the water mountain now, following a kind of circular movement of the water molecules. And then finally, it goes downwards, in a fast and deep dive along with the breaking water masses through the famous tube, created by the simultaneous suction and fall of the water. Perhaps a comparison with a Judo exercise is appropriate, in which a teacher grabs his student, draws him to his body and then with a rapid hip movement - one that cannot be foreseen, nor understood - is swung onto the mat.

After I was thrown from wild heights under water, heavy water masses collide from above. They push me deeper under water and form chaotic turbulences of such enormous proportions that one is forced to consider that the laws of physics are inapplicable here in this boiling white water wash. My body is thrown around like a toy, from left to right, up and down, again and again. The balance organ of any human, located somewhere behind our ears, is overwhelmed by this wild wash and usually decides to shutdown entirely. The result is that I - while still under water but slowly escaping the gigantic wash drum - have completely lost my sense for direction now.

I am also running out of air and with the first signs of panic try to find oxygen again. But, since still under water and totally disoriented, I have no idea in which direction the saving water surface lies at all. Do I dive further down into the depths ? Do I only move sideways ? It is a moment of utter helplessness in an otherwise gentle environment that an adult human being can rarely experience that way.

The onset of panic, especially during a first such experience, is followed by the insight that the only way to deal with this situation is to completely let God lead the way, and to hope that the laws of nature will truly work as they were made - that they will make sure that I can reach the surface to finally catch some air again ...


Years later, I walk in the city of Munich through the English Garden in the most beautiful summer weather, and suddenly stand near the Eisbach, a small side river of the Isar with a strong water current. At some point the rapidly flowing river meets an obstacle under water and builds a wave.

From both sides of the river surfers jump alternately from the left and right bank onto the so-called standing wave and ride it for a few minutes or seconds. It feels like being in a wrong movie since surfers are rather associated with California or Australia, than with Munich. But soon my eyes get used to the wetsuits and the wax on the surfboards, and I think of my days as a wave surfer.

I watch the Eisbach surfers for a while, until I notice that something completely different is going on here on this river wave. While an ocean surfer uses the energy of the wave to accelerate himself and his surfboard and rides a wave at a fairly high speed, the Eisbach surfers remain more or less always at the same spot. They move only sideways, from the left river bank to the right and back again - maybe 15 meters in total -, always riding the same standing wave without really taking any forward drive.

For the Eisbach surfer himself, a kind of surf illusion as if he would really be surfing must happen in his or her mind when looking down from the board into the rapidly flowing water underneath. Only an observation from outside the river reveals that it is not the surfer who really moves with his board, but instead the river water streaming at high speed underneath. The Eisbach surfer stands more or less still on a standing river wave - aside from a short move from the left river bank to the right, and back again.

The counterpart to the Eisbach surfer are probably the so-called Big Wave Surfers - a handful men in the world who are physically and mentally able to ride huge ocean waves. Watching film clips of those gigantic wave rides usually make you worry about whether and how the little point in the wave with board on his feet would ever be able to savely return from that gigantic water mountain trolling behind. Big Wave Surfers sometimes carry small oxygen tubes to be able to survive eventual wipe outs and unimaginable turbulences under water.

Big Wave Surfers to me, however, are also those who mentally know how to ride huge waves on their 'boards'.

As soon as being back to the beach after one of the big wave rides, be prepared that all sorts of Eisbach surfers try to cut the leash, steal the wax, or even want chop your surfboard into small pieces. Anyone who really surfs knows about this kind of envy.

Relief comes only from one thing: getting back into the real waves.


It sure helps being a Top Gun surfer as well:

...and just in case some may need advise on how to deal with judiciary supremacy, here's a little hint:


On March 3, 1969 the Unites States Navy established an elite school for the top one percent of its pilots. Its purpose was to teach the lost art of aerial combat and to ensure that the handful of men who graduated were the best fighter pilots in the world.

A Populism from Munich

About mental garbage from the German establishment