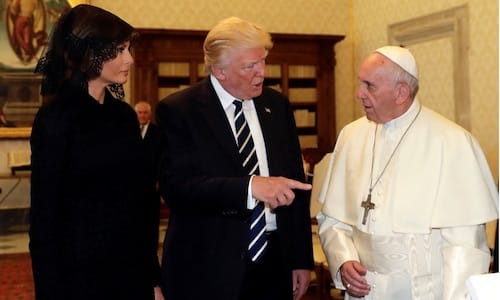 Dark Mode
#Catholic   #Soros
Disgraceful. The word is used plenty of times in the everyday English of people in the streets of London, New York, and Los Angeles. Not quite long ago, this word also caught the media attention when it was utilized by then US presidential candidate Donald J. Trump.

This in response to the claims of Pope Francis in an airplane, and in which Bergoglio thanked Donald Trump for his statements that the Pope would allegedly be “a political man“, because “Aristotle defines human beings as political animals“. He himself, Pope Francis, would at least be “a human being“. And the Pope continued: “Someone who thinks only about building walls, wherever they may be, and not building bridges, is not a Christian.“

What could have Donald Trump meant by that ?

A more detailed analysis - and more in-depth than usually done in the traditional media - reveals quite clearly what the US president meant, and most likely continues to be convinced of (attention, what follows are definitely NOT fake news !).

Let's begin in the autumn of 2014. On October 21, the men's professional soccer team of the FC Bayern Munich won their Champions League game against AS Roma with a fabulous 7:1. On the following day, October 22, the entire team including coaches, managers, and club officials visits the Pope at an audience in the Vatican. The FC Bayern managers presented Pope Francis a check over 1 million euros from a charity game which had yet to be played in the following year 2015. The 1 million euros were made immediately available to the Pope: “Pope Francis may then himself decide how these funds should be used, to spontaneously help people in need wherever they are in the world and regardless of their faith“, according to FC Bayern CEO Karl-Heinz Rummenigge.

The Pope has helped the homeless in Rome now and then since his election as head of the Catholic church. After the arrival of the FC Bayern check, a free shower room had been prepared, homeless people were given noble sandwiches from a fine delicatessen store, Christmas presents were handed out and warm sleeping bags donated during the winter season. After all these suspiciously media-effective actions there should have been around 700,000 euros left from the generous check of the FC Bayern alone, however - and only if the delicatessen sandwiches were handed out in large numbers every week. There has probably been a more urgent need for monetary help somewhere in the world than that of the many homeless people in the immediate vicinity of Pope Francis in Rome.

For example in the United States.

In late August 2016, Wikileaks revealed that billionaire George Soros had spent $650,000 US Dollar via his so-called “Open Society Foundation“ on influencing Catholic bishops in the USA during the Pope's visit in September 2015 and until the US election phase of 2016. Board meeting protocols of the Open Society Foundation in New York from May of 2015 show that Cardinal Oscar Rodriguez Maradiaga, personally mentioned on page 15 in the protocols, was engaged in influencing even the Pope directly during his visit to the United States in 2015:


“In order to seize this moment, we will support PICO’s organizing activities to engage the Pope on economic and racial justice issues, including using the influence of Cardinal Rodriguez, the Pope’s senior advisor, and sending a delegation to visit the Vatican in the spring or summer to allow him to hear directly from low-income Catholics in America ... By harnessing the Papal visit to lift up the Pope’s searing critique of what he calls 'an economy of exclusion and inequality' and his dismissal of 'trickle down' theories, PICO and FPL will work to build a bridge to a larger conversation about bread-and-butter economic concerns and shift national paradigms and priorities in the run-up to the 2016 presidential campaign.“

The results of this and other activities were summarized in a report of the U.S. Opportunities Fund from 2016, a fund mostly financed by George Soros' Open Society Foundation. Page 12/13 states the following:


“The initiative ... build on the momentum of the Pope’s September 2015 visit to the United States. The initiative’s grantees sought to use this opportunity to mobilize their tens of thousands of members in local chapters in 11 states to build toward a set of concrete policy reforms to be advanced in 2016 ... The impact of this work and the relationships it has fostered can be seen in the broad range of religious leaders hitting pointedly back at presidential candidates for their use of fearmongering ... Fund provided essential resources to undertake the following activities: form partnerships with the AFL, SEIU, and 11 faith groups during the September events in order to mobilize 10,000 people to public action and train 3,500 others as messengers of Pope Francis’ economic and racial justice agenda.“

The grants were also used to help emphasize on the income equality of men and women, instead of that of the relationship between the two (board meeting protocols, page 15):


“The grant will also support FPL’s media, framing, and public opinion activities, including conducting a poll to demonstrate that Catholic voters are responsive to the Pope’s focus on income inequality, and earning media coverage that drives the message that being 'pro-family' requires addressing growing inequality.“

In order to do so, local US bishops were massively influenced. Page 13 of the report of the U.S. Opportunities Fund mentions this among the activities funded with the $650,000 US dollars:


“Buy-in of individual bishops [!] to more publicly voice support of economic and racial justice messages in order to begin to create a critical mass of bishops [!] who are aligned with the Pope.“

According to the same report, other goals included (page 13):


“Development of an advanced media campaign featuring FPA’s Catholic Director as a leading commentator in high-profile outlets, such as USA Today, Newsweek, CNN, NBC, NPR, the Boston Globe, the Washington Post, and the Guardian.“

According to LifeSiteNews, an attorney named Elizabeth Yore travelled to the Vatican in April of 2015 in the name of George Soros to influence Pope Francis' views on birth control and climate change. In an interview with LifeSiteNews, Yore said the following about Soros’ initiative:


“Catholics serve as a huge and influential voting block in the U.S. election“, and George Soros is “using the head of the Catholic Church to influence this key voting block“ with the “bully pulpit of the papacy“ to ensure Hillary Clinton will be elected.


Yore further mentioned according to LifeSiteNews:


“...this is not the first time that an unholy alliance [!] of Soros and the Vatican successfully collaborated on a political project. The Soros operatives, embedded in the Vatican, directed Pope Francis’ Environmental Agenda by delivering for Soros and the UN an Apostolic Exhortation on Climate Change, and a prized papal endorsement of the UN Sustainable Development Goals and the Pope’s apostolic blessing on the Paris Climate Treaty [in the year 2015].“

In terms of the goal of George Soros and his organisations to lead the Catholic church away from their moral dogmas, two bishops in the US were initially preferred:

Robert McElroy, bishop of San Diego, California, was championed in changing the moral views of the Church according to LifeSiteNews. He received the support of Archbishop Cupich from Chicago, one of the Pope's most preferred and favored bishops in the United States.

San Diego's McElroy caused an uproar at the US Bishop Conference in November of 2015 because of his comments that the bishops' joint statement had been unmoored from Pope Francis' priorities, since the bishops' document was, in McElroy's opinion, too focused on abortion and euthanasia. He also tried to apprehend the bishops' document with instructions on how - and therefore who - Catholics would have to vote. Chicago's Archbishop Cupich praised McElroy's intervention at the US Bishop Conference in Baltimore as a “real highlight“, and supported him in bringing environmental protection and global poverty issues on the same level as abortion and euthanasia.

The US Opportunities Fund report further claims on page 13:


“PICO and FPL have been able to use their engagement in the opportunity of the Pope’s visit to seed their position in the long-term project of shifting the priorities of the US Catholic church to focus on issues of injustice and oppression. The Pope has invited PICO to help plan the 3rd World Meeting of Popular Movements, a conference organized by the Vatican to partner with social movements and organizations, taking place in the US this year. Resistance to this inside the US Conference of Catholic Bishops has been stark, and grantees are engaged in a live fight with a faction of the church that seeks to curb the Pope’s influence on social justice issues.“

Soros' group was satisfied with the results. And regarding the future they found it “exciting to see this long-term process is now underway“ and that a change of priorities among US Catholic bishops had been initiated.

Apparently, quite a lack of decency had been initiated as well it seems, and which had certainly influenced the one or the other bishop in Europe as well. Or, to summarize in another word: