Many, many small slaughterbots
About a dangerously real scenario
1586599902
Copied 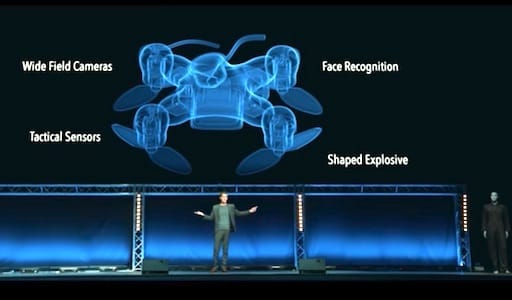 Dark Mode
#AI
Avideo scenario of how killer robots could soon be able to operate, is being distributed these days by people who are engaged in trying to prevent such projections from becoming an actual reality.

The following video demonstrates what is not fully a reality yet, but what could potentially become a likely scenario in the not very distant future:

Mini-robots are rapidly improved as well. This one receives its energy from a nearby laser and hence does not need a heavy battery.


Autonomous robotics also advance rapidly. Winner of the famous 2016 DARPA-Challenge - which had already paved the way for self-driving cars in the past - had been a university laboratory from England with the name KAIST and which is being critized by leading high-tech personalities two years later because the lab is beginning to cooperate with military organisations:


Another interesting video illustrates well how intelligent machine learning algorithms are able to identify objects in real-time and with high accuracy:

We only have to be wanting

About the limits of human will