Merkel or not Merkel, that is here the question, Israel
The shocking anti-semitism of Europes political elites
1569786436
Copied 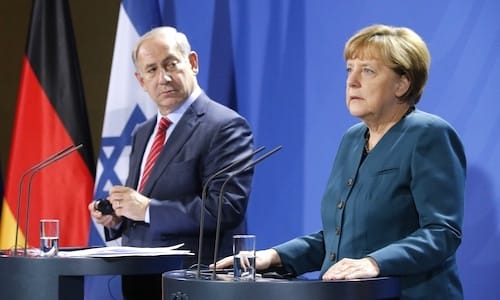 Dark Mode
#Merkel   #Israel
On December 6, 2017 the US President had announced it will move its embassy in Israel over the next four years from Tel Aviv to Jerusalem.

Europe's politcal elites did not hesitate to condemn this move immediately. British prime minister Theresa May, and - truly surprising - also Angela Merkel boldly announced to the press that they believe this decision to be wrong, if not at least a bad one:


“The German government does not support this position, because the status of Jerusalem is to be resolved in the framework of a two-state solution.“

People in Israel have surely noted this eclatant display of european anti-semitism among its many political leaders, and will surely move closer to the US and to whom Jewish leaders express their “eternal gratitude“ for the move.

Interestingly, it was only three months ago that a delegation of high ranking european Rabbi's congratulated Angela Merkel to her "election win" in Germany and named her "the responsible leader of the western world and the (!) hope for Europe".

According to the statements of Rabbi Pinchas Goldschmidt, President of the Conference of European Rabbis and Rabbi of Moscow on Germany's election eve in September 2017:


“Four years ago, [Angela] Merkel received the Rabbi Jacobovitch Prize of the Conference of European Rabbis at a special ceremony in the Great Synagogue of Europe in Brussels, in recognition and gratitude from European Jewry for her steadfast adherence to the rights of Jews to freedom of religion, especially the issues of shechita and circumcision and support of the Jewish community ... Merkel's re-election reinforces the stability of Europe and it's Jewish communities.“

Pope Francis joined the political debate immediately, and warned of an “escalation“ - an escalation that fundamentally so far is nothing more and nothing less than the rightfully decision of the US government to move it's own embassy in Israel approximately seventy car kilometers further to the East over the next four years.

Looks like as if the majority of political leaders in Europe do not want to prevent tensions, but rather seem to have an interest in fueling such with their statements now.

Ironically, ex-President Barack Obama held a speech in Chicago only a few days prior to the decision about Jerusalem. He issued concerns regarding the safety of the “gardens of democracy“ and pointed out that it would be important to engage in the political process because otherwise things could turn out like “in Vienna in the late twenties or beginning 30'ies“ and when “60 million people died and the whole world turned into chaos“. One “needs to pay attention ... and vote“, Obama told the crowd in Chicago.

It's understandable that after eight years of leading the oval office, personal and professional change comes along with resistance. Nonetheless, many in the US look at the ex-President's speeches, activities and meetings with various world leaders even after the end of his two-term presidency in a very different way by now:


By the way, the US-President saves around 95% of the original 1 billion US Dollar budget for the new US embassy in Jerusalem, and which opens it's doors promptly on May 13, 2018, the Jewish festive day of the liberalisation of Jerusalem.