Pilgrimage to Jerusalem
A short story on ecumenism
1586599517
Copied 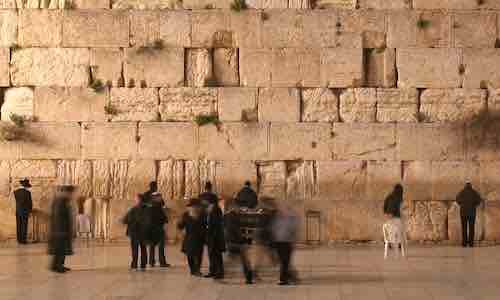 Dark Mode
#Religion
Once upon a time, not so long ago, a pilgrim was on his way to Jerusalem...

He walked with his backpack for many, many weeks and eventually reached a plain landscape that he had to cross. Almost in the middle of the nearly one hundred kilometer desert like region, the pilgrim tiredly laid down his backpack and wanted to rest in the shade of a palm tree a little off the beaten track.

But when he had almost reached the palm tree, the pilgrim suddenly fell into a sandy pit, almost five meter deep, and found himself on the ground of it.

He looked up and tried to escape the hole. But the walls were sandy and there was no grip to reach the top. The pilgrim fell back to the bottom again and again...

After a few hours a pilgrim came down the path and saw the backpack. He walked towards the palm tree and spotted the pilgrim in the hole. "I am a Muslim and I will pray for you", he said into the pit. He pulled out his prayer rug, turned it towards Mecca, performed his prayers and then rolled the rug back in. Then he said to the pilgrim: "Inshallah, Allah wanted it that you fall into the pit. I will continue praying for you". Then, he went his way.

Shortly after, another pilgrim came down the path, saw the backpack and went to the pit. "I am a Hindu," he said, "and that you have fallen in there is your karma, your destiny. You have to learn to accept it. I will pray for you in one of our temples in the next town and will light incense sticks for you." He also went on.

A little later, the next pilgrim came. "I am a Buddhist," he said down the hole, "and how wonderful that your Buddha has led you to this place. Here you have the great opportunity to truly get to know yourself in total silence without anyone disturbing you. You may be able to reach nirvana. I wished to be that far already." He meditated quietly in front of the sandy hole for some time and then went on without saying a word.

Somewhat later another pilgrim came along the way and discovered the hole. "I'm a free church Christian," he said, "and that's terrible, what happened to you. I will immediately pray with and for you so that we can get you out of the pit". He smiled while pulling out his guitar and immediately began to play trance-like prayer music. He sang aggressively down the hole again and again that the pilgrim in the pit should now and finally open his heart for Jesus. When after two hours he became tired of making music and his loud prayers, he took a short sip from his RedBull and then played some quieter music. When a beautiful female pilgrim came along the way who was also a free church Christian, he took his stuff and followed her.

Some time after, another pilgrim came along the way. "I am an Evangelical-Lutheran Protestant, and you deserve to have fallen into here", she said angrily into the hole. "You are a patriarchaic husband who had left his wife and children alone at home while you are enjoying your pilgrimage. I will go to the nearest village, will notify your wife, will advise her to file the divorce and to apply for the sole custody of the children." Before she went on she spat into the hole and kicked against the pilgrim's backpack a few times.

A little later, another pilgrim arrived. "I am a Russian Orthodox Christian," he said, "and unfortunately I can not help you because this country does not belong to Russia and you were not baptized in the russian orthodox church. But I will give you a small bottle of vodka and will pray for you. Oh, and yes, since you no longer need your sleeping bag you will certainly not mind if I exchange yours with my old one", he said, throwing a small vodka bottle down. He exchanged the sleeping bags and walked on.

Only a short time later a Greek Orthodox Christian came along the way. "That's terrible, what happened to you," he said, "I will help you of course, will go to the next village and return with help. But as you know it is very hot and because of the heat I can only walk early in the morning and in the evening. It may take some time to be back". He held a three hour prayer service in the old, orthodox rhythm, slept next to the sandy hole and slowly went on early the next morning.

Soon, another pilgrim came along the way. He also saw the backpack and went to the hole. "I am progressive-liberal Catholic," he said indignantly, "and find it terrible on part of the Catholic Church that there are no pits for homosexuals and the remarried divorced". He took a spade and dug several holes in front of which he set up the appropriate signs. "Furthermore, in the next village I will send a letter to Pope Francis," he said, "and in which I will urge him to set up an official Vatican plate at the beginning of the pilgrimage to Jerusalem, pointing out that this walk is explicitly also available for these people". After that he defiantly walked his way.

Not long after, another pilgrim came to the hole. "I am a member of the Catholic Curia in Rome," he said. "You can confess with me, my son." He took his stole, put it around his neck and listened quietly and patiently to the pilgrim at his confessions. He gave him the absolution and his blessings. He then took a bite from his salmon sandwich and a sip from his expensive Pellegrino sparkling water, cleaned his fine leather shoes, wished the pilgrim down the hole all the best and God's abundant blessings and went on in a good mood.

A little later another pilgrim came, he saw the backpack and went to the hole. "Oh my God, that's cruel," he said at the sight of the pilgrim in the pit. "I am a Jew," he said, bitterly crying, howling, and repeatedly beating his head against the palm tree. After a few minutes he said to the pilgrim down the pit: "I will go to the nearest village and get help. Should you have starved or died of thirst in the meantime, we will close the pit with your mortal remains in it once we are back. Anyone passing by can drop a small stone on your grave. We will have your grave fenced and declared as part of the state of Israel. You will subsequently be recognized as an Israeli citizen. After that, we will track down and sue all those who have set you this trap. May the God of Abraham, Isaac and Jacob be with you, my brother". He went on.

Finally, a tall pilgrim came along the way. His clothes looked used, he had apparently been on the road for a long time. He walked barefoot and had only a small backpack. His face was shaped by the sun and the wind. He went to the pit and quietly listened to the pilgrim's experiences. Afterwards he said: "Make a little space down there, I will come down to you."

He jumped down into the pit, gave the pilgrim some water and bread and said: "Stand with your feet on my shoulders. I will push you up, and with some help from your end you should be able to easily get out of from this sandy hole." The pilgrim did as suggested and was finally able to escape the pit.

Overly happy, the pilgrim thanked his rescuer down in the hole, assuring him to seek help as quickly as possible and asking for his name. But his savior just told him to get help quickly.

The pilgrim ran as fast as he could to the next village, drinking some water from one or the other cactus on the way, and telling the people there about his rescue. A jeep was organized and a rescue team drove back with the pilgrim immediately.

But when they arrived and looked down into the hole, they found that it was empty.

This article was entirely created and written by Martin D., an accredited and independent, investigative journalist from Europe. He holds an MBA from a US University and a Bachelor Degree in Information Systems and had worked early in his career as a consultant in the US and EU. He does not work for, does not consult, does not own shares in or receives funding from any company or organisation that would benefit from this article so far.
Leave a comment: