We could utilize cookies and need access to some of your browser settings. Click the following button if you agree with our data protection terms. We do not store any of your personal data when using our website in a regular way. 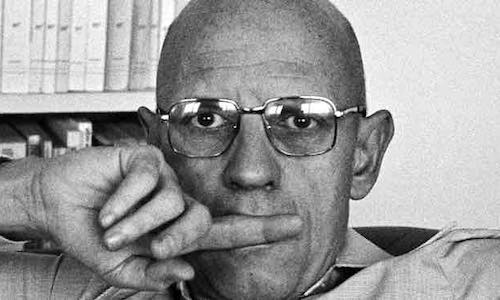 Listen to this article
The Deconstructionalists

Parents are quite familiar with the behaviour of destructive children at a playground or the beach. It takes hours to build stunningly beautiful landscapes full of castles, fortresses, houses and other creative objects in the sand with one's own kids. Oftentimes however, when finally observing and likewise enjoying the results of the sandy dedication, an angry and destructive child appears from out of nowhere to take pleasure in destroying the entire landscape within a few seconds.

One is reminded of such destructive children when reading the works of two prominent French philosophers named Michel Foucault and Jacques Derrida. Their writings, some of the most important ones published in the 1960s, lead to a new chapter in the discipline of philosophy called 'Postmodernism' or 'Deconstructionism'.

Michel Foucault, born in 1926 in Poitiers, France as the son of medical doctors, studied psychology and philosophy at the Parisienne elite university Ècole Normale Superieure (ENS) and later went to the Sorbonne University where he received his psychology license. Aged 25 and without much real world expericence, he became university professor at ENS, attracting many philosophy students - among them Jacques Derrida. Foucault, an admirer of controversial French psychiatrist Jacques Lacan, joined France's Communist Party in 1950 shortly before finishing his dissertation, but leaving the group only three years later amidst conflicts with Stalinists and his open homosexuality:


I wasn't always smart, I was actually very stupid in school ... here was a boy who was very attractive who was even stupider than I was. And in order to ingratiate myself with this boy who was very beautiful, I began to do his homework for him - and that's how I became smart, I had to do all this work to just keep ahead of him a little bit, in order to help him. In a sense, all the rest of my life I've been trying to do intellectual things that would attract beautiful boys. (Michel Foucault, 1983)

Foucault's dissertation evolved into his book "Madness and Civilization", which was published in 1961. In it he claimed among other that the discipline of psychoanalysis would be responsible for the "imprisonment" of insane behaviour, not the other way around.

While philosophers mostly prefer to expand on high-level aspects detached from real life, Foucault chose to focus on very hands-on areas of civil societies not limited to thoughts about the government, the justice system, prisons and psychiatry. Most philosophers adopt a rather critical approach towards government, Foucault however encouraged a stronger government with powers and responsibilities to control and shape even the most individual aspects of its citizens:


This word [government] must be allowed the very broad meaning it had in the sixteenth century. ‘Government’ did not refer only to political structures or to the management of states; rather, it designated the way in which the conduct of individuals or of groups might be directed – the government of children, of souls, of communities, of the sick ... To govern, in this sense, is to control the possible field of action of others. (Michel Foucault in "The Subject and Power")

He went even further, claiming that individuality would be the sole result of the surrounding social environment and its embodied power structures:


It's my hypothesis that the individual is not a pre-given entity which is seized on by the exercise of power. The individual, with his identity and characteristics, is the product of a relation of power exercised over bodies, multiplicities, movements, desires, forces. (Michel Foucault)

Foucault took an various international assignments as well. He taught and lived in Warsaw, Poland, in Hamburg, Germany and in Tunis, Algeria. In 1970 he started to politically support prison inmates, which lead to the publication of his book "Discipline and Punish. The Birth of the Prison". In 1975, he wrote three books about the history of sexuality, before passing away in 1984 of AIDS.

Foucault gained respect among many radical-left activists and liberal political groups post mortem, not limited to Antifa groups in Germany and the LGBTQ community there.


Jacques Derrida had a not unsimilar approach towards philosophy. Born 1930 in Algeria as the son of Jewish parents, he was not allowed to attend public school because of discriminatory policies towards Jews at the time in that Arab country. The childhood experiences and his growing up in a closed and secluded community had a vast impact on his philosophical work in the years to come, Derrida learned what it meant to be a Frenchman among Arabs in Algeria and a Jew among Catholics later in Paris, where his family moved to in 1949.

His enrollment at the elite university École Normale Supérieure (ENS) precluded a rocky episode, he had to cancel a first entry examination because of pharmacophilia - pill abuse. He was finally admitted to the elite ENS university in 1952, but fails the final examinations in ethnology, psychologie and also in philosophy in a teaching examination in 1955. During that time, Derrida established a long-lasting friendship with above mentioned Michel Foucault.

Derrida finally passes his examinations in 1956 and - strangely - receives a scholarship to briefly study at Harvard University in the USA. He is called to teach at Sorbonne University in 1960, but changes back to ENS with the support of famous French philosopher Louis Althusser. Derrida was affiliated with the 1968 student protest movement, which is about the time when he writes two of his most important books titled "Speech and Phenomena" and "Of Grammatology".

In them he tried to justify a radical new view of the world. A the center of his findings is language and its inherent functionality. When we think, we associate words with an image and vice versa when we observe an object with our eyes. According to Derrida, we do not define objects or words by their potential on how they can be transformed however, but instead associate historically evolved word-pairings with them that are opposed to each other: black - white, woman - man, good - evil, inside - outside.

Derrida was also convinced that words in written text are not inherently fixed in any way in their meaning, and that even single characters are entirely "open" in their interpretation. Hierarchies of words and their bracketed meanings must hence be broken down or deconstructed, a notion that was put at the fundament of almost all feministic and also various political movements like gender mainstreaming or the #MeToo campaigns.


A text is not a text unless it hides from the first comer, from the first glance, the law of its composition and the rules of its game. A text remains, moreover, forever imperceptible. Its laws and rules are not, however, harbored in the inaccessibility of a secret; it is simply that they can never be booked, in the present, into anything that could rigorously be called a perception. (Jacques Derrida)

Derrida's political engagements included the fight against Apartheid in South Africa and against the death penalty in the USA. He supported left-liberal political groups in France, was for illegal immigrants and their voter rights, and pro gay marriage. He died in 2004 of cancer.

Deconstruction according to Derrida does not only mean the dismantling of historically evolved opposites, but also the creation of something new, something that was previously unseen or hidden.

In its extreme form not unsimilar to nasty children at the beach, out to destroy beautiful landscapes build into the sand.

by Martin D., an accredited and independent, investigative journalist from Europe. He holds an MBA from a US University and a Bachelor Degree in Information Systems, worked as a Consultant in the US and in the EU, and is currently writing on a book on how the mainstream media turned into a radical political player.

Teen Spirits
About Jeffrey Epstein and a book named Lolita