#Australia
Even though most people are probably familiar with the phrase 'looking is not seeing, and listening is not hearing', the past has it made harder for us to truly understand the implications of these words. As a result of our dramatic increase in smartphones and high resolution computer screen usage over the past decades, we have - oftentimes completely unnoticed - turned our daily decision makings increasingly towards what we can see with our eyes only. Beyond of what our eyes can see however lies a sea of fields that are sense-able to us only by the use of technical instruments, which have developed in quite an interesting way over the centuries.

As early as around 3000 BC, Egyptians discovered that certain Nile river fishes were emitting magic flashes and rays. A similar effect occurred when rubbing amber, the fossilized tree resin, on a cat's fur, which is why the first natural philosophers betitled the phenomena with 'electricus', from the Greek wording for 'like amber' ἤλεκτρον. In 1820, Danish physicist Oersted was reportedly one of the first to have been quite surprised after he found out that electricus had a strong, yet entirely invisible impact on the effects caused by a mineral called magnetite, since the needle of a compass would redirect itself when placed near an electrically charged wire. England's James Maxwell predicted in 1861 that vice versa magnetite could also have an impact on electricus, calling the effects electromagnetism from then on. In 1887, German physicist Heinrich Hertz created an apparatus which showed that electricus was magically able to stimulate magnetite to travel over distances. Magnetite could even pass on electricus' original energy to others far away. What's more, magnetite's travel was done with the speed of light and by the characteristics of electromagnetic waves, some of them were soon called radio waves. Here, electricus and magnetite were a perfect match to invisibly transmit first basic codes and soon human speech over longer distances, leaving the entire world literally speechless when the first invisible voice transmission occurred in the year 1900:


One, two, three, four. Is it snowing ? Where you are Mr. Thiessen? If it is, telegraph back and let me know.

Most recently in 2022, such radio waves as developed around 1900 were instrumental in identifying the flight path of missing Malaysian Airplane MH370, which disappeared the night of March 8, 2014 over the Indian ocean with 227 passengers and 12 crew members on board. An aerospace engineer from England named Richard Godfrey analysed radio waves used by amateur radio operators from around the world to track MH370's route.

What at first sight seems too good to be true, has turned into a proven and viable way to come up with a likely location of the plane. Godfrey used signal data from the WSPR website, which stores massive amounts of amateur radio signals into a database. The database provides signal details in 2 minutes intervals, including information on disturbances caused by larger objects flying through the radio waves. Since the location over the Indian ocean, date and time, as well as the radio waves' altitude eliminate any other object interfering as the data show, the result of Godfrey's deep analysis is a detailed flight route of MH370.


There are in total 160 of these detections, they have been disturbed by an aircraft, in this case MH370...out in the Indian ocean, there was just one other aircraft in several hours that passed an hour flying time away from MH370. So it's very easy to discount you are picking up another aircraft. It has to be an aircraft at a certain altitude, it's not picking up ships on the surface of the water, or things like that.

Godfrey's findings are surprising and contradict to a large part the official governmental narrative of an accident or even a ghost flight without a pilot as the cause of the mysterious plane crash. Flight MH370 took off at around 00:42 AM local time on March 8, 2014, heading north towards its original destination in China. According to Godfrey's very likely flight route, the plane made a 79 degree turn westwards after exactly 40 minutes flying time, which is also the moment when MH370's transponder would not transmit any longer and the air traffic controller's radar screens went blank on MH370, including radio silence and no calls by the pilot. Twenty minutes later, the airplane is crossing the Malaysian peninsula, only to fly around the northern coast of Sumatra. After two hours and 14 minutes into the flight, just northwest of Sumatra, MH370 turns into a holding pattern for about 20 minutes, initiating a number of oval shaped loops with a turn pilots also use to make sure they are not being followed.

Negotiations with Kuala Lumpur - if occurred - must have failed because MH370 would leave the loop pattern after 20 minutes and head precisely towards a pivotal location about 30 minutes flying time south at position 2°S 92°E. Here, the flight information regions of Jakarta, Colombo and Melbourne meet in a single point. Zaharie and his MH370 reach exactly this point to head straight into the southern responsibility region of Melbourne, Australia at 20:06 UTC. Zaharie would make a left turn immediately after reaching Australia's flight region with a flying path that would have projected him now to probably still reach Geraldton Airport in the north of Perth, Australia.

What happened within the 30 minutes after entering Melbourne's flight information region remains a mystery, since MH370 would make a right turn to leave the projected Geraldton airport flight path at 20:41 UTC. Zaharie, or whatever pilot, is literally heading into the vast ocean straight south now. Richard Godfrey's calculated flight path also shows that a litte more than one additional hour later, MH370 makes a slight turn left again at 21:56 UTC. For about 30 minutes, MH370 is now on the exact flight path that would lead to the end point as predicted by the pilot's home simulator, found days after the crash in Zaharie's house. At 22:26 UTC, MH370 makes a right turn again to leave that flight path as well. At 22:46 UTC, the pilot navigates slightly left, heading straight south into the wide ocean again. The plane's headwinds are significant now, providing for an even more precise WSPR flight path calculated by Godfrey. By 23:58 UTC, MH370 runs out of fuel, the plane begins to dive into the ocean at a calculated final position at 33.177°S 95.300°E. 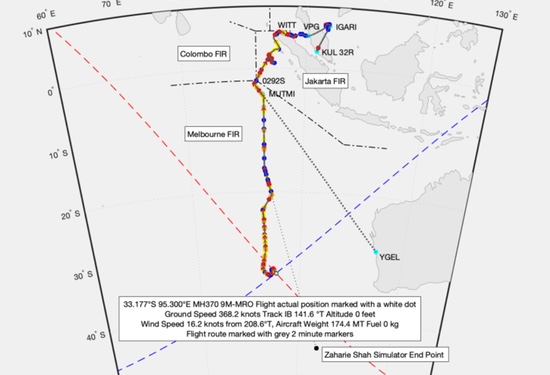 The underwater area of that location is about 2000 km west of Perth at the edge of a 4000 meter deep sub-mountain seabed called Broken Ridge. It is also situated in the upper left corner of a gigantic search area determinded by Australia's unsuccessful four-year long governmental $200 million effort to locate MH370. Godfrey's calculated location is aligned with the findings of Professor Charitha Pattiaratchi, a world-leading oceanographic researcher at the University of Western Australia who predicted the location to be at 33°S 95°E. Starting 2014, Professor Pattiaratchi, who was never invited to participate in any official search effort, had calculated a complex oceanographic drift analysis. He provided his findings to investigators, who were able to find some of MH370's debris arriving at Africa's East coast and on the shores of Madagascar:


It was Professor Charitha Pattiaratchi's drift analysis that guided me to Mozambique and Madagascar where I found the debris, and now Richard Godfrey is saying we should go looking in the same area that Professor Pattiaratchi had indicated around latitude 33.

Private investigator Blaine Gibson in a statement from 2022

A number of independent observers have verified Godfrey's WSPR findings, the Malaysian government explained they would "review them", Australia's Transportation and Safety Bureau may eventually consider a new expedition to finally locate the plane. The privately held marine robotics company 'Ocean Infinity' announced plans to start a new expedition with an entire fleet of robotics and brand new state of the art

In 2014, as an immediate response to the death of 239 people on board, Malaysia's government initiated an extensive search in the waters around Northern Sumatra. MH370's very likely politically motivated suicide murder crash needed to be suppressed as much as possible even in the years to come. The incident can also be regarded as the beginning of globally orchestrated media campaigns to prevent the truth from surfacing at all cost, considering the many wild conspiracy theories about MH370 back then - distributed even by formerly respected media outlets.

Mid 2018, a final 500 pages report by Malaysia's 'Safety Investigations Team For MH370', which also lists MH370's debris found in Africa on page 394, had the effect that Azharuddin Abdul Rahman, Malaysia’s Civil Aviation Authority Chief, resigned over "air traffic control failures in Vietnam and Malaysia". Whether that resignation was also due to another Malaysian Air flight MH17, which exploded with 298 people on board over Eastern Ukraine only four months after MH370's disappearance remains unknown so far.

Noteworthy is also that Barack Obama would visit Kuala Lumpur around seven weeks after MH370's disappearance in a first US presidential Malaysia visit since Lyndon Johnsons's talks there in 1966. Obama met with Malaysia's Prime Minister Najib Razak on April 26, 2014 to assure further "military assistance for the search of the missing Malaysian airplane". In a joint press statement, Najib and Obama also "welcomed the increasing high-level interaction between [their] two countries in recent years, including the numerous Cabinet-level exchanges of visits, and continued dialogue at various levels".


Whether there were similar effects between Obama and Najib in April 2014 as there are between electricus and magnetite is not yet known.

From Washington with Love

About an American indictment and the Church in England