Dark Mode                Latest edits
#Munich   #Bavaria   #Germany
Who is the most successful in the entire country ? Probably in such a way FC Bayern Munich's soccer managers and directors may have been asking the invisible mirror at their Allianz arena suites, following their 10th German football championship win in a row on May 7, 2022. "You are the most successful", the mirror may have responded, "but the Liverpool FC in the land of the British across the Channel is still a thousand times more successful than you", the mirror probably echoed back, all while the ten-year subscribed championship trophy was received as an exuberant success, and the somewhat theatrical celebrations had begun at Allianz arena. 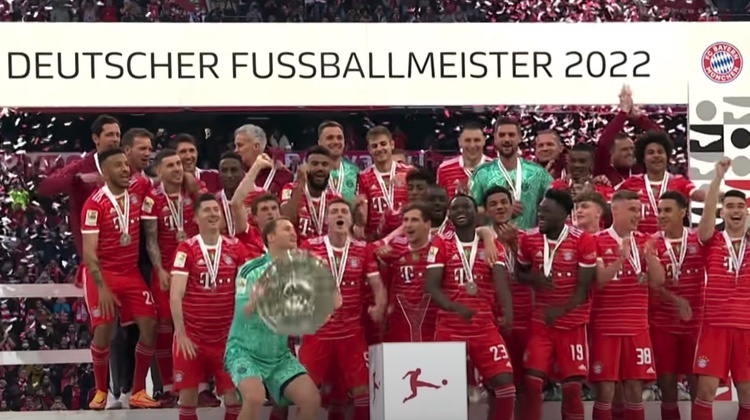 The one or the other manager may have asked himself in a quiet moment above the clouds on a flight to Mallorca or Papa New-Guinea in search of fresh talents and players there how it came about that beyond Munich and Upper Bavaria, where the global empire of the hostile Prussians begins, one simply does not seem to be in any way affected about FC Bayern's Germanic football dominance. Apparently, a number of incoming phone calls high above in the clouds to make sure additional player-stars are being incorporated into gemuetlich Bavaria were already in line waiting.

Once on the ground again, one is not too eager to dig into the reasons for the truly inglorious record title win a few days ago either. At least half of Europe had noted already six months earlier in a rather astonished way at the end of October 2021 that mid-seated Moenchengladbach had sent Bayern back home in an

Holstein Kiel - FC Bayern, 2021
astonishing 5:0 win against Munich in the German Cup competition. A year before, the Northern second league heroes from FC Holstein Kiel kicked the FC Bayern stars out of the German Cup. In April 2022, the rather miserable Champions League elimination by a not particularly great playing FC Villareal in the Allianz Arena flickered worldwide across monitors as well. For painful self-criticism however, there is not much time in Catholic-dominated Bavaria. Instead, a truly stoic Bavarian futurism ensures such thoughts are quickly being brushed away like the trophy celebrations' paper ribbons on the Allianz stadium tribunes. Better to just focus once again on the coming season, where "a renewed attempt in the Champions League" will be made. Meanwhile, many critical press reports about the FC Bayern suspiciously seem to be pushed far down in the Internet web search result pages, perhaps with secret help from Pullach near Munich ?

The list containing the many downright breathtaking FC Bayern stunt shows with worldwide impact is rather extensive, they usually happen outside of the football game away from the Allianz Arena's grass field. And they are responsible for much more than only a negative marketing image that could quickly be cleared up with a few soccer victories and some intelligent charity activities. People quietly know about FC Bayern's machinations in a networked, global world just as much as FC Bayern Munich is aware of its own connections with a number of organisations, institutions and even government offices around the globe. The results are years of proverbial cock-ups, entangled in extreme top-down strategies, which, beyond FC Bayern's massive and impressive economic success, must feel from within the Bayern's control center quite a bit like being cursed. 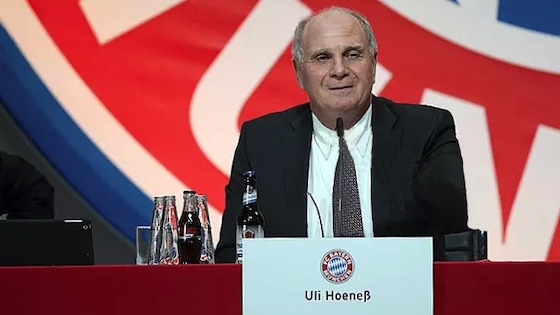 For example, there is the case of FC Bayern president Uli Hoeneß, who was convicted in 2014 because of tax evasion amounting to many million Euros with reference to Switzerland - a place where Russian and other money-shovelling oligarchs also like to move their money to. Hoeneß was allowed to serve a prison sentence walking free for many hours a day at the Lake Starnberg branch of exactly the same penal institution in Landsberg, Bavaria where Adolf Hitler also served a nearly 12-month prison sentence after his failed 1923 putsch in Munich. As we all know, Hitler used or rather abused his prison term in order to actually get really started by writing his book 'Mein Kampf' in Landsberg prison. Such dark historic memories did not seem to bother FC Bayern's management and directors much when Hoeneß was reelected again to the position of FC Bayern's president exactly 270 days after the end of his prison term on November 25, 2016 amid joyful Bavarian tears at their general meeting.


I promise that I will do everything I can to live up to the expectations. I want to be a strong and eloquent president for you, I will clearly address major problems along the process, especially with regard to our 'Attack Division'. It is not sleeping, it is resting.

Uli Hoeneß at the FC Bayern members' meeting on November 25, 2016, 270 days after his release from Landsberg prison

Things were quite dubious four months after Hoeneß went to prison in June 2014 as well, when the entire Bundesliga team, including managers and coaches, made a pilgrimage to the pope after FC Bayern had beaten AS Rome 7:1 in the Champions League the day before. There, the team presented the then highly criticised pope a check over 1 million euros - possibly for the indulgence of sins occurred at FC Bayern months earlier. The money was 'promised' so to say as income from an FC Bayern charity match that had yet to be played at the time the check was handed over in Rome. 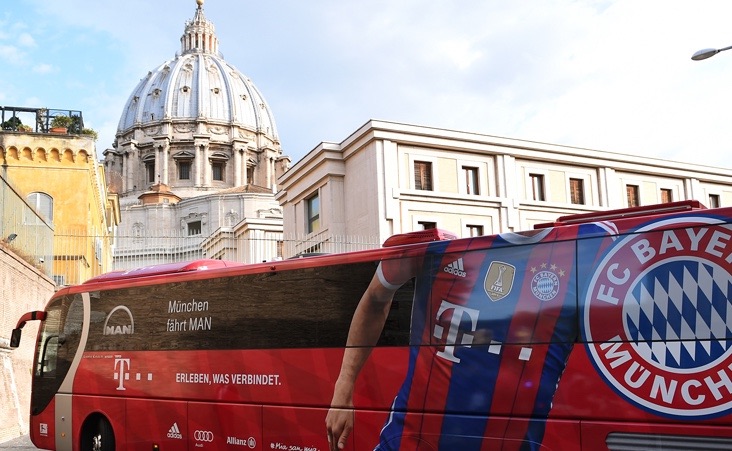 FC Bayern's rather unfortunate connections to Qatar are also well known. Still, the FC Bayern management and team is regularly surprised about the Prussian's enemy efforts of reporting particularly about the soccer team's winter training camp in Doha since 2018, focusing especially at that time of the year on Qatar's human rights violations. FC Bayern could probably motivate even state representatives from Northern Greenland to build a gigantic tropic training resort for them, choosing Qatar as a regular winter getaway was most likely an idea that had spun up at some secret behind-the-doors-meetings at Munich's Security Conference. Here, Qatar's bid for the 2022 World Cup was promoted in a joint effort, also through former FC Bayern star player Philip Lahm by the way, who held a townhall meeting titled "Bridging Troubled Waters: De-escalation in the Gulf" with
When a crisis meeting was called at the Euro-Cup organizer in Switzerland, UEFA forbade the city and the Bavarians to illuminate their stadium in these rainbow colors. At least half of Munich then hissed rainbow flags and continued to carry out partly vicious political attacks against Hungary and even UEFA.
Qatar's World Cup chief organiser at the 2020 Security Conference in Hotel Bayerischer Hof. There, Lahm explained that "the World Cup brings people of all kinds together", plus in an eventually closer to be examined, highly cognitive dissonant manner and in his very own view that, quote, "it is nowadays easily possible for anyone to attend a World Cup match in person at a stadium", even and especially in Qatar.

That FC Bayern was further criticised from 2017 on, when the team went on an extremely bank-account-profitable marketing trip to China - a country regularly criticised for their partly extremely brutal human rights violations occurring in larger numbers - was probably attributed to just another round of malicious attacks from the many Prussian enemies at and against the supergiant's presidential offices.

FC Bayern's most impressive stunt shows occurred in recent years, however. Unforgotten and globally noted were the political embarrassments surrounding the infamous European Championship match between Germany and Hungary in the Allianz Arena in June 2021. Here, not only the German team captain demonstratively wore a brightly colored rainbow armband as a sign of unconditional support for LGBTQ+ minorities, but even the entire stadium was ordered to glow in the same rainbow colors upfront of the game. When a crisis meeting was called at the Euro-Cup organiser in Switzerland because Hungary's President Orban had complained about the accompanying political smear campaigns against his government explicitly from Munich, UEFA forbade the city and the Bavarians to illuminate their stadium in these rainbow colors. At least half of Munich then hissed rainbow flags and continued to carry out partly vicious political attacks against Hungary and even UEFA, this through all political party lines and across many Bavarian-Munich state offices, including colorful declarations by FC Bayern's management.

FC Bayern legend Paul Breitner is surely equally puzzled as to why the nasty and hostile Prussians outside of Bavaria often confront him with such incomprehension. The thought that this might also be due to the fact that Breitner, who has been voluntarily supporting needy people at the Munich Tafel for years, acts precisely against his otherwise so kindly serving citizens when he publicly announced in 2021 that he would demand a COVID vaccination proof, or otherwise radically refuse to hand out the most basic food supply, probably never really struck the Bayern. 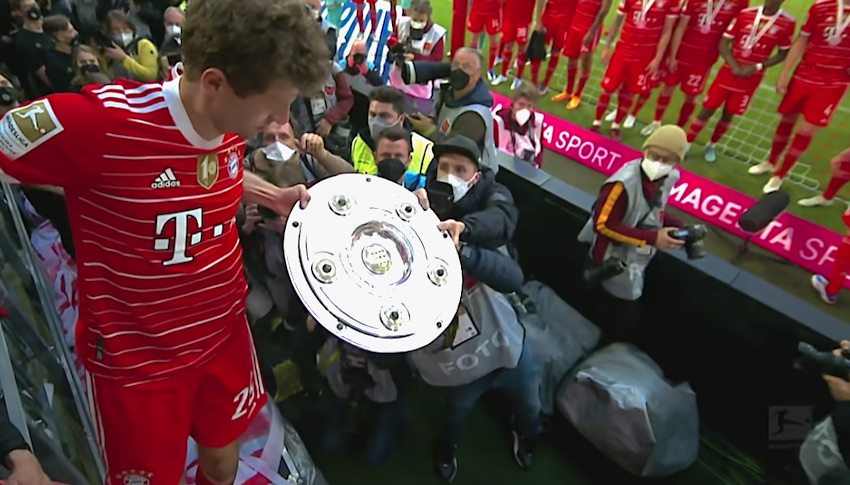 Once celebrated Barcelona star coach Pep Guardiola was also not particularly unhappy about turning his back on the Bundesliga and FC Bayern in May 2016. Guardiola, probably deliberately drinking wine and not the obligatory Bavarian beer at his farewell presentation at Munich Marienplatz, had two exhausting years behind him with constant patronising, including by the presidium and the Bayern corporation board, which at the time also included Karl-Heinz Rummenigge. Rummenigge left the FC Bayern AG board early in mid-2021, another fact hardly reported on in the mainstream media.

Another strange and at the same time obvious attack happened shortly before the Champions League final at the end of May 2022. FC Bayern's management and presidential cadres would not limit transfer talks with Liverpool's Sadio Mané, one of the Paris finalist players, to some quiet negotiations. Instead, sport director Hasan Salihamidzic coincidentally stated literally days before the Paris final between Liverpool FC and Real Madrid publicly and with grand fanfare that transfer talks with that finalist player had been initiated, allegedly being at an advanced state. Which then lead a number of press outlets to echo probably another FC Bayern Pullach ignited narrative directed at Liverpool - with perfect timing for Real Madrid.

Over the years, FC Bayern has become a successful business enterprise, generating billions in revenues over the past years with substantial reserves in its accounts, all while many other major European soccer clubs have been heavily indebted for years and remain so. Yet despite the very highest cash incentives to star players all over the world, real soccer champions suspiciously often keep their distance from Munich. 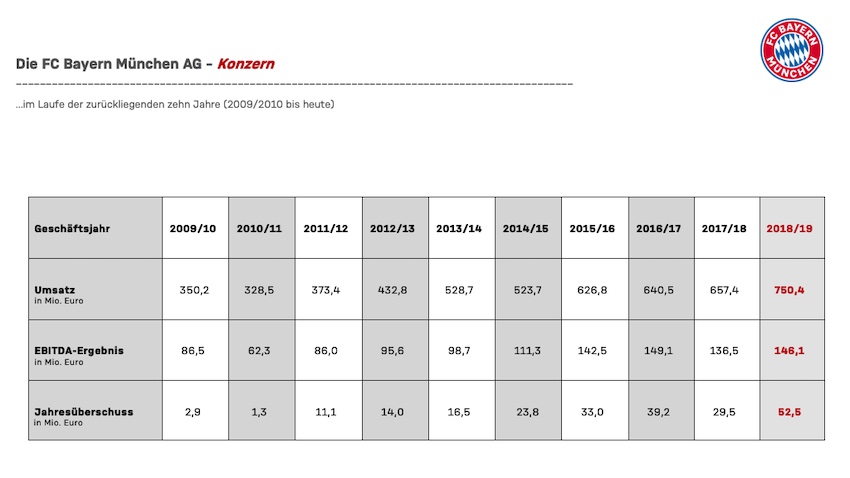 Soccer usually is a game with only one winner. And Snow White would certainly not have allowed herself to be kissed awake by the current FC Bayern Munich.