#vonderLeyen   #Corruption   #Germany
Many know that pirates existed in the Carribean. Few are aware however that such pirates also exist in Central Europe, far from any ocean. And also not too many in Europe and around the world know about current EU president Ursula von der Leyen's scandals during her time as Germany's Defense Minister and about how her high-profile Pirates of Berlin protected the conservative politician, who was for a long time second ranked in Merkel's political party CDU. 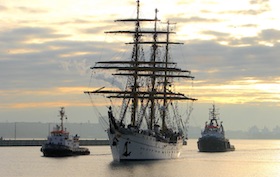 In 2016, the German Defense Ministry under Ursula's leadership ordered the renovation of Germany's prestigious sailing ship 'Gorch Fock' and awarded the contract to a shipbuilding company close to Bremen. Renovations went out of control from $10 million to $170 million. A procurer of the German Navy criminally referred himself and ignited the scandal surrounding the Gorch Fock in late of 2016. 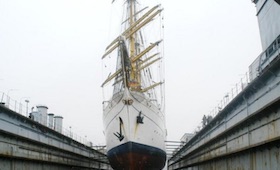 The shipbuilding company was owned by a non-profit foundation lead by Marcus Reinberg, a German honorary consul of Mongolia who created a web of companies that laundered money. Ursula's pirates of the defense ministry in Berlin soon cleared her by stating that she was fed with 'incomplete and illicit estimates' regarding the project. 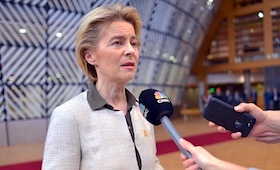 Ursula also allowed the volume and number of external consultants to increase, those for Accenture from $0.5 million in 2014 to $20 million in 2018. An ex-McKinsey employee named Katrin Suder became key confidant in awarding contracts, Ursula's son David meanwhile worked at McKinsey in California from 2015 until 2019. 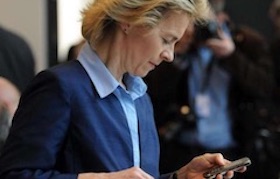 Various sweetheart consulting deals lead to investigations in 2018. At the center was an Accenture Partner who held close personal relationships with a high ranking General and who was awarded with contracts allegedly because of family ties. Ursula's phones were wiped entirely shortly before leaving office and heading to Brussels. 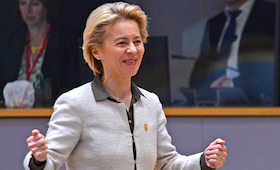 Ursula never appeared on any ballot list for the EU elections. Despite - or because - various investigations into Defense Ministry scandals she was declared EU president soon. Members of the German Bundestag claim that important information on Ursula's phones were allegedly destroyed and ignited criminal investigations.

The German mother of 7 children with aristocratic ancestry was named Germany's first female Defense Minister in 2013, aiming to put the military organisation of Europe's largest economy back on track.

In 2016, Germany's prestigious Navy sailing ship 'Gorch Fock' was found to be in need of urgent renovations. The Defense Ministry quickly found a shipbuilding company named 'Elsflether Werft' near Bremen in the North of Germany to rehaul the boat. Initially estimated at $10 million, the project quickly went out of control. Costs rose first to $30 million, then to $70 million and even to $130 million. In December 2018, a procurer for the German Navy criminally referred himself for violating purchasing rules and ignited the scandal surrounding the Gorch Fock. The shipbuilding company was at that time fully owned by a non-profit named Sky-Foundation.

Around two years earlier, the shipbuilding company's owner Barbara Rohden had died. She strangely ordered to transfer all her wealth to the Sky-Foundation headquartered in Hamburg post mortum, including the entire ownership of the shipbuilding company. Then Sky-Foundation Chief Executive Marcus Reinberg, a lawyer, honorary consul and university doctor of Mongolia, quickly decided to engage in money laundering through a web of various companies around the world. Instead of the shipbuilders, these shady organisations now became the beneficiaries of the rapidly increasing German Defense Ministry budgets, initially provided for the renovation of the 'Gorch Fock'. A gold mining project in Mongolia was among those that received funding from Reinberg's Sky-Foundation during that time.

Shortly after taking over the post as the first woman to lead Germany's military in 2013, Ursula von der Leyen also decided to have the number and volume of consultancy contracts increased dramatically for the German Defense Ministry. Accenture was one of the major beneficiaries, the global consultancy company could increase its German Defense Ministry projects from $0.5 million in 2014 to $20 million in 2018. An ex-McKinsey employee named Katrin Suder became key confidant for Ursula von der Leyen in handling external consulants and projects. Ursula von der Leyen's son David was employed at McKinsey in California from 2016 until 2019:


After 7 years in Solution Manager Development I decided to take on a new challenge. During the last years I met a lot of interesting people. (David von der Leyen when leaving McKinsey in 2019)

Various sweetheart consulting deals lead to investigations in 2018. At the center was an Accenture Partner who held a close personal relationship with a high ranking General and who was awarded with contracts allegedly because of family ties. Interestingly, that infamous Accenture Partner was not only formerly employed at Germany's so-called 'Constitution Protection Agency' (Verfassungsschutz), but also at Munich's Security Conference.

Ursula von der Leyen never appeared on any ballot list for the EU elections in 2019. Despite - or because - various investigations into Defense Ministry scandals, she was declared EU president soon. The German Defense Ministry came under scrutiny again after wiping von der Leyen's phones entirely the moment they were turned in when leaving office. Investigators claim that crucial information was allegedly 'destroyed', members of the German Bundestag filed criminal referrals and initiated investigations.

Almost like in the movie 'Pirates of the Carribean', where a ghost ship named 'Black Pearl' mysteriously appears when no one expects it in order to drown evidence and entire crews into the deep blue sea. Will the 'Black Pearl' be in need of renovations as well soon ?