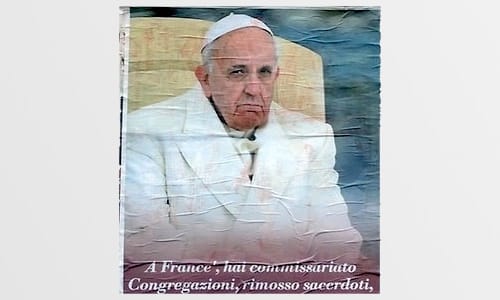 Dark Mode
#Catholic   #Rome
On February 5, 2017, the news reported that the night before unidentified people had put large pope critical posters all over Rome. The wordings of the posters were as follows:


“Hey Francis, you have ordered the congregations to be controlled, have removed priests, have gotten rid of the Order of Malta and the Franciscans of Immaculate, and ignored cardinals ... But where is your mercy ? 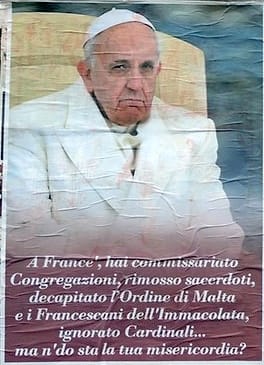 is said to have reacted quite calmly to these displays and which had been organized by allegedly “conservative circles“ from within the Catholic church - at least according to the many left-liberal church media. Journalists from domradio.de wrote an article about the incident and described it as follows:


“Police investigates pope-critical posters in Rome ... The Italian police removed more than 200 posters in several neighborhoods on Saturday, including near the Vatican. So far, no concrete hints regarding the perpetrators exist. A special police anti-extremism unit (!) has launched an investigation. Italian media suspect conservative church circles behind the action who reject the reform course of Francis.

Journalists from Austria reported the following:


“The originators of the incidents remain unknown. Observers suspect behind it conservative church circles. The text of the poster obviously refers to events that had led to criticism of the pope in these circles; for example, the letter from four cardinals to the pope, who expressed doubts about his letter 'Amoris Laetitia', and received no answer.

Very interesting are the comments by Bernd Hagenkorn, head of the German editorial board of Vatican Radio, and who had said the following according to an article of “Die Welt“:


“The cases that are stirred together are very different and have nothing to do with each other, except that the Pope is the responsible person. One can imagine where it comes from. From those who demand the observance of law, but when the pope does so, they force him to draw his attention to mercy. And when the pope is merciful, then they want the law. Depending on their situation.

On the basis of these selected articles one can recognize very well which undeniable confusion and biased attitudes the past so-called "Year of Mercy" has left Catholics with.

The investigations of the Italian police in Rome have so far and according to our research led to no results. Therefore, the logical next step for conservative Catholics would it be to file a lawsuit for libel and defamation, and to send a special police unit for the combat of extremism to domradio.de, catholic.at and to the German editors of Radio Vatican. But luckily, there was the year of mercy recently.

In any case, we would urge Catholics to distance themselves from both ultra-conservative and obnoxious left-fascist circles - meaning it would be best to leave the church organization right away, since there is a real danger in the Catholic world currently that a special police unit for fighting extremism will be sent to one's home when trying to express the truth.

According to the article of “Die Welt“, the posters were dismantled quickly, by the way:


“... a few hours later, the posters disappeared, removed by the city cleaning people. "Because they were illegally hung", says a city employee who inspects one poster at a time with his colleagues. "There's another one over there," he says, and hurries on. Everyone who lives in Rome knows that things like that usually happen pretty slow in the Eternal City. But the criticism does not survive for long. It is simply scrubbed away.

What has not been scrubbed off and remains of this incident - an incident that reminds to the Scholl siblings from 1943 in Munich, by the way - is a very obvious inability of so many Catholics and their deliberately manipulative media to accept criticism. One should advise them to orient themselves a little more towards the words of a tourist at the sight of the Italian-language posters:


“I do not understand what's written on them, but my boyfriend's name is also Franz.