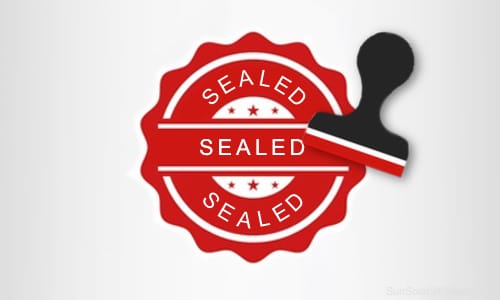 Dark Mode
#Corruption
In the video below, Senator Louie Gohmert is talking about an important document regarding the cover-up of investigations into the Uranium One take-over by Russia's Rosatom. The motion to seal was signed in 2014 by Rod Rosenstein, Deputy Attorney General of the Department of Justice of the Unites States of America.

To recap, Rod Rosenstein named Robert Mueller in May 2017 as head of the special counsel in order to examine alleged Russian interference with the Trump campaign, a so-called investigation which by March of 2018 may have eaten up an estimated 10 million US Dollar and turned out to be more a Coup d'état effort in order to undo the presidential election from 2016, than an unbiased investigation into the matter.

Robert Mueller was Rod Rosenstein's direct superior at the DOJ in 1990, the first mentioned is also best friend with ex-FBI Director James Comey by the way.

Some of the reasons why Rod Rosenstein may still and even until this day be acting the way portrayed by Louie Gohmert above, is outlined in a well-written article by Andrew McCarthy on The National Review's website, and which contains important background information regarding the matter, as well as an New York Times article from 2015:


“In 1992, the administration of President George H. W. Bush agreed with the nascent Russian federation that U.S. nuclear providers would be permitted to purchase uranium from Russia’s disassembled nuclear warheads (after it had been down-blended from its highly enriched weapons-grade level). The Russian commercial agent responsible for the sale and transportation of this uranium to the U.S. is the Kremlin-controlled company 'Tenex' (formally, JSC Techsnabexport). Tenex is a subsidiary of Rosatom.

Tenex (and by extension, Rosatom) have an American arm called 'Tenam USA'. Tenam is based in Bethesda, Maryland. Around the time President Obama came to power, the Russian official in charge of Tenam was Vadim Mikerin.

As Tenam’s general director, Mikerin was responsible for arranging and managing Rosatom/Tenex’s contracts with American uranium purchasers. This gave him tremendous leverage over the U.S. companies. With the assistance of several confederates, Mikerin used this leverage to extort and defraud the U.S. contractors into paying inflated prices for uranium. They then laundered the proceeds through shell companies and secret bank accounts in Latvia, Cyprus, Switzerland, and the Seychelle Islands — though sometimes transactions were handled in cash, with the skim divided into envelopes stuffed with thousands of dollars in cash.

The inflated payments served two purposes: They enriched Kremlin-connected energy officials in the U.S. and in Russia to the tune of millions of dollars; and they compromised the American companies that paid the bribes, rendering players in U.S. nuclear energy — a sector critical to national security — vulnerable to blackmail by Moscow.

At the time [an] unidentified man [who later got identified as Mike Campbell] became [FBI] informant [while working side-by-side with Mikerin and providing insider information to the FBI], the FBI was led by director Robert Mueller, who is now the special counsel investigating whether Trump colluded with Russia. The investigation was centered in Maryland (Tenam’s home base). There, the U.S. attorney was Obama appointee Rod Rosenstein ... the man who [later] appointed [Robert] Mueller as special counsel to investigate Trump.“

The US Department of Justice issues an indictment against a CEO of a nuclear transportation company from Maryland in January 2018 - a case connected to Uranium One. Vadim Mikerin is also mentioned in the DOJ text. Further details bring to light that one of the judges in this indictment is Theodore Chuang. Chuang, an Obama nominee living in Maryland, was studying at Harvard University the exact same time when Obama did his studies there, and had been one of the first judges to reject Trump's travel ban for six muslim countries in 2017. Furthermore, Chuang had been appointed as a federal judge in 2014 against completely all Republican votes in the Senate. Plus, Chuang had been one of the most active individuals in stonewalling the 2012 deadly terror attacks against US ambassadors in Benghazi. 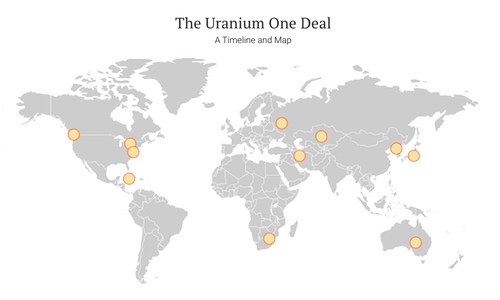 The Uranium One Deal - Timeline and Map

The name Rosenstein and Maryland is always around the corner, it seems...

In April 2018 Rod Rosenstein generously tells the press that the US-President apparently is not a target in the investigations of the special counsel, lead by Rosenstein's ex-boss Robert Mueller. Truly surprising, considering the fact that a memoranda exists since 1972 and which advises the US-Department of Justice that indicting a sitting president would undermine the constitutional capacities of the executive branch - hence making the year-long media proclaimed narrative of the special counsel redundant at least. If the Constitution of the United States of America remains valid, then any US-President cannot be indicted but only impeached, a political process that needs to be done by the US Congress.

By the way, Rosenstein had issued an originally disclosed memorandum regarding the special counsel on August 2, 2017 - about ten weeks after the appointment of Robert Mueller:


"The Order authorized you to conduct "the investigation confirmed by then-FBI Director James B. Comey before the House Permanent Select Committee on Intelligence on March 20, 2017, including: (1) any links and/or coordination between the Russian government and individuals associated with the campaign of President Donald Trump; and (2) any matters that arose or may arise directly from that investigation" ... This memorandum provides a more specific description of your authority."

It is then - on August 2, ten weeks after the nomination of Robert Mueller - that Rosenstein extends the responsibilities to "any matters", most probably because of the resistance and counter-lawsuits of Paul Manafort's indictments meanwhile - and which Manafort's lawyers claim to be "unmoored" from Mueller's original duties.

Senator Gohmert has a history of experiences with Robert Mueller as well by the way, and which are outlined in his 48 pages report.

The US-Department of Justice Deputy Attorney General Rosenstein sure had his reasons to disclose the Uranium One findings in 2014 as outlined by the Senator in the video above. An explanation could be his wife Lisa Barsoomian, who is a well-known lawyer in Washington, DC. She works for the law firm R. Craig Lawrence, and which had helped the Clintons and others extensively over the past decades, representing Hillary in seventeen legal cases, Bill Clinton in fourty, Barack Obama in fourty-five, James Comey in five, and even Robert Mueller in three legal issues.

The Department of Justice should look into this shady Rosenstein - Democrats - Deep State relationship when examining bribery and pay-for-play schemes within their own department as well. But it is unlikely they will do - a dog hardly bites himself into his own tail either.

The press reports on April 13, 2018 that a draft for impeachment of Rod Rosenstein had at least been prepared by members of Congress. Question remains if this drafted document will ever be turned into reality one day. Rosenstein seems to be offended by this drafted document and tells the public and the press on May 1, 2018 that "threats" against him cannot be tolerated, and that the Department of Justice would not let itself "be extorted".

Immediately after these statements Congressman Mark Meadows responded with the following:


"If he believes being asked to do his job is ‘extortion,’ then Rod Rosenstein should step aside and allow us to find a new Deputy Attorney General—preferably one who is interested in transparency"

On July 25, 2018 - shortly before the summer break - a handful of US-Congressmen finally introduce five articles of impeachment against Rod Rosenstein. The Deputy Attorney General of the United States of America is claimed to have intentionally withheld documents and information from Congress, had failed to comply with congressional subpoenas, and is charged with abuse of the Foreign Intelligence Surveillance Act (FISA) according to these articles.

Rosenstein is under further criticism in the beginning of October 2018 when FBI General Counsel James Baker states in his interview with FBI officials that Rosenstein had seriously considered in May 2017 to secretly tape the US-President at his meetings, and had also tried to invoke the 25th amendment in order to remove Trump from office.

Interestingly, after Attorney General Jeff Sessions resigns on November 7, 2018, Maryland's attorney general Brian Frosh seeks for a judge to rule that Rod Rosenstein should be named acting attorney general, and not the US President appointee Matt Whitaker.

Further discoveries regarding Rod Rosenstein bring to light that the Deputy Attorney General refused to investigate and possibly indict James Comey after his many misleading statements to lawmakers. A lawyer for Trump wrote a criminal referral to Rosenstein who refused to act on James Comey, leading to the following statements:


He blew me off ... That’s not leadership. That’s not accountability ... We did it in writing. We did it politely. We did it confidentially. And he just blew us off. So, I lost all respect for Rod Rosenstein.

This article was entirely created and written by Martin D., an accredited and independent, investigative journalist from Europe. He holds an MBA from a US University and a Bachelor Degree in Information Systems and had worked early in his career as a consultant in the US and EU. He does not work for, does not consult, does not own shares in or receives funding from any company or organisation that would benefit from this article so far.
Leave a comment: