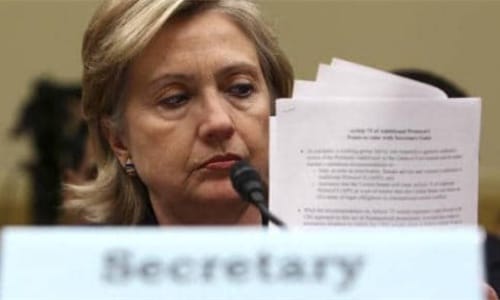 #Clinton   #Corruption
The former US Inspector General (I.G.) for the intelligence agencies, Charles McCullough, had been informed in 2016 by the FBI regarding top secret information residing on Hillary Clinton's unsecured computer server - information, which potentially could have put people in great danger if unveiled inappropriately.

The I.G. went after this case and informed members of the US Congress as well as the State Department. But instead of receiving support in order to resolve this matter, McCullough was threatened to be fired from his job if he would continue investigating.

More details can be watched in the video below:

A letter, signed by seven members of US Congress - Dianne Feinstein and Adam Schiff from California being two of them - was sent a few weeks after Clinton's email revelation to McCullough, and in which the seven politicians complain that ”already, this [investigational] review has been too politicized”.

How exactly the investigations regarding the Clinton-Emails on private servers had been sabotaged by high ranking members of the FBI and the Department of Justice since then can be read here. Quote:


"- During and after her time as Secretary of State, Hillary’s work-related emails were kept on a wholly unsecured system, and were accessible to numerous people who did not possess security clearances
- The electronically-stored documents included hundreds that were classified as Top Secret or otherwise classified
- Hillary Clinton was not a government employee after she left her post as Secretary of State in January 2013, and had no legal entitlement to keep any State Department records as a private citizen
- The Department of Defense and Department of Justice (which controls the FBI) have a duty to investigate and stop classified information security breaches by persons who are not entitled to possess classified information, as well as recommend prosecution of persons who mishandle or steal classified information

How was the Clinton email case different?

Despite early notification that Hillary had used an unsecured system to store classified information, the FBI and DOJ took no steps whatsoever to contain the breach for at least six months–they didn’t even try to find out who possessed the classified information.
When the investigation finally began, the FBI and DOJ used extremely slow and irrational procedures to investigate the case, which (1) provided advance notice to the targets that evidence would be sought in the near future, and (2) used extremely passive efforts to gather evidence (such as sending preservation letters and subpoenas instead of obtaining and executing search warrants).
The results of early inaction and slow evidence gathering allowed Hillary’s IT team to destroy evidence that could have been seized and preserved. Despite the mass destruction of evidence, every person who participated was given immunity from prosecution by the FBI and DOJ for their roles in destroying the evidence."

The FBI had repeatedly tried get access to allegedly hacked servers, located at the headquaters of Hillary Clinton's presidential campaign - the DNC - but were 'not allowed' to gain access, and/or to investigate them.

On December 29, 2017 a set of interesting Clinton Emails were presented to the public and which had been forwarded from Clinton aide Huma Abedin to the laptop of then husband Anthony Weiner for printout. 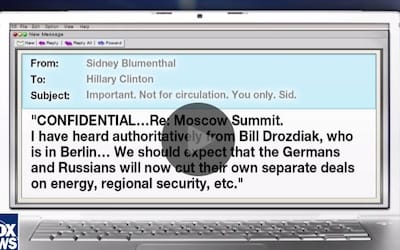 Germany is mentioned in the above video as well, in particular Bill Drozdiak, the former President of the American Council in Germany.

On February 7, 2018, an interim report from the US Senate Committee on Homeland Security and Governmental Affairs is being presented to the public, and which unveils additional insight into the matter.

An interesting verbal summary from May 2018 about the entire scandal can be seen here. Also, the report of the Inspector General from June 14, 2018 confirms Hillary Clinton's special treatment by the FBI, among other.

Furthermore, some IT-experts hired by many democratic politicians of the US-Congress - one of them having been the right hand of DNC chairwoman Debbie Wasserman-Schultz - and who had administrative access to many US congress servers and workstations came under criminal investigations after it was uncovered that these IT aides had connections to the Hisbollah and the government of Pakistan while working inside the US Congress.

Emails on Hillary Clinton's Server had not only been forwarded to an unsecured Yahoo!-Email-account by the way, but for a while been rerouted entirely to a Gmail acccount on Google's servers, especially prepared by employees of the Internet giant.

In addition, end of August 2018 brings to light that a Chinese-owned company from Washington, DC was allegedly able to hack into Clinton's private server and could install a small software that sent copies of all 30,000 Clinton emails in real-time to an email address of that Chinese company. These findings were the result of in-depth investigations of the Inspector General in the early months of 2015. The FBI rejects these claims.

The press also reports that during a not very distant timeframe from 2010 until 2012 the Chinese government was able to systematically uncover CIA operations in China and had at least 20 associated people killed.

Furthermore, lawyers of the US Department of Justice had negotiated an agreement with the Clintons and installed a 'filterteam' to keep relevant emails and documents regarding the investigation inaccessible to the FBI and others.

A forensic analysis of the first batch of Clinton EMail files as announced by Romanian Hacker 'Guccifer 2.0' and published by Wikileaks at the end of July 2016 comes to the conclusion that the individual files as part of the 2 gigabyte sized Zip file named 'HRC_pass.zip' were generated first on April 26, 2016 between 1pm and 4:30pm at a location with East Coast timezone and most probably by the use of an Internet satellite connection. Almost two months later, on June 20, 2016, these individual files were copied from a thumb drive to a computer located in the US Central timezone, compressed into a Zip file and allegedly 'hacked' there.

After Wikileaks had announced on June 12, 2016 a batch of Hillary Clinton related emails to be published soon - about three weeks after the initial generation of the individual files on April 26, 2019 - these files were actually made public on Wikileaks' website on July 22, 2016 - about one month after the creation of the Zip archive.